Daly Calling it a Career… Once Again 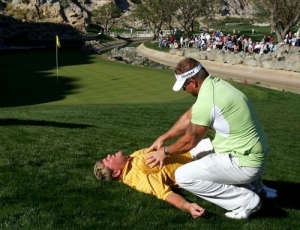 Only Daly gets a breast massage mid-round

John Daly said for the umpteenth time that he is done with golf. Not sure how likely it will be for good, since he’s made comments like this before. Either way I’m sad to see him go. He’s been known to quit, and sometimes has quit in the middle of a round, but today he sounded pretty serious saying on the Golf Channel after his round “I’m done, I Just can’t play like I used to… I’m tired of embarrassing myself.”

Strong words from a guy who never really seemed to care what people thought of him. It’s not like he was a big factor on the PGA as it’s been nine years since his last victory, but for whatever personal reason something told him he had enough.

I have a feeling that his ultimate demise had something to do with his lap band surgery, and how he lost nearly 100 pounds in just a couple of months. He looked like a shell of his former self, literally after the weight loss. Since the surgery, he hasn’t been nearly as good on the course, and looked even worse health wise. I guess some of that could well be father time doing the damage plus all those millions of drinks and smokes he had on the course. I’ll always remember him for his Happy Gilmore like attitude that screamed I don’t give a f*** what you think of me! One of my favorite examples of this isn’t his mullet, but when he was beaten by his girl, and he could have withdrawn from the tourney, but he still showed up scratched face and all. Much more than I can say for Tiger, and his assault case… Have we even really seen a picture of Tiger since it all went down? Whatever, hopefully he’ll join the senior tour, so he’s not out of golf for good. I wrote a tribute to him awhile back, but felt I needed to dedicate one more post to one of my all time favorite golfers. He was one of the main reasons I even tried golf out when I was a kid. I guess I just liked the mullet!