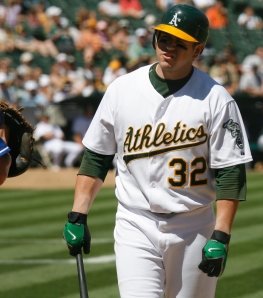 Well, the A’s signed JacKKK Cust today to a one year deal of about $2.4 million. I was crossing my fingers he wouldn’t be back, and thought we did say our goodbyes, but sadly he he is back. He was our top home run hitter last year, so in the end I see why, especially for a discounted price… It’s funny how the Giants were rumored to be talking to him, they must be pretty happy the A’s stepped to the plate with a contract. I’m hoping we never have to see him in the field. We already have a few too many outfielders, and what looks like a good defensive team. Messing up that defense by putting Cust down there doesn’t make you feel all that excited. Adding one more outfielder to the mix isn’t going to help anybody feel like they have a set role on the team. Maybe Beane has some plans to make some more trades. I for one, hope he does. It’s still early in the off-season, so I won’t say this is a bad move yet. The signing of Duscherer was a major plus, but I think this signing could be bad. I hope he doesn’t clog up the bases with his walks and not give all our speedy guys a chance to run the bases or strike out with the bases loaded too much this year.

I'm a dude that just hit 30 years old. Pretty much like everything that is funny, insightful, and has to do with the Warriors, A's, and Raiders. END_OF_DOCUMENT_TOKEN_TO_BE_REPLACED
This entry was posted on Thursday, January 7th, 2010 at 8:10 pm and tagged with Baseball, Jack Cust, MLB, Oakland Athletics, one year, Signing and posted in Sports. You can follow any responses to this entry through the RSS 2.0 feed.
« The Cuban Missile is Going to be a Gayngel
Doin NBA Power Rankings »

9 responses to “Subtraction by Addition”