Last week was a nice winning week of 4-3 and finishing the regular season vs. the spread at 49-45-3. I’m happier than Scott Boras every time a client of his signs a long deal that my predictions led to a winning season! The playoffs are a completely different story though. I usually struggle in predicting the outcomes in recent years. You really don’t know how these games are going to turn out, but I’ll do my best to steer you in the right direction. As always the home teams are in bold.

Ochocinco will have a tough time on Revis Island

The Bengals have shown one thing since Chris Henry’s untimely death, which is, they aren’t past it. The gloom of losing a teammate has put them in the losing column in three of their last four games. The Jets meanwhile got two straight teams on bye weeks, and are amazingly in the playoffs. Indy and Cinncinati laid down for them, Tampa wasn’t hard to keep under 10 points, Atlanta WAS a tough opponent to hold to ten, but I’m tired of this double fist pump fetish on the Jets D. Sure they have Revis, who will shut down Ochocinco, but I don’t see them winning more than this wild card game. Sorry Cincy, but you’re injured at the wrong time, and playing your worst when it counts most. At least you were the most successful Hard Knocks team so far! The Jets will win, but I’ll be rooting for Cincy. Who knows Sanchez could choke on a pepper and throw a few interceptions and give this one away.

Call me crazy, but I still think the Eagles are the better team. In the playoffs, they will pick up their game. They have been there, and will step up. McNabb is a perfect 3-0 in the wild card round over his career, and has 8 more playoff wins than Romo, who hasn’t won A playoff game. I can’t take anything away from Romo at this point as he has played some very good football lately. My lingering hope is that since he has played so damn well lately, he is bound to come crashing down to the Romo that looked so bad earlier in the season. Or even the Romo we saw four weeks ago will do. I know there’s a lot of doubters on the Eagles side after last week’s shellacking, but about this time a week ago, the experts were putting them in the Super Bowl. I guess everybody likes to jump ship every now and then.

Wes Welker this, Wes Welker that, is pretty much all you hear about this game. Although Brady hasn’t thrown many other receivers this year, that doesn’t make me believe he can’t throw to the other guys. Sure his completion percentage is going to go down with Welker out of the game, because Welker is that good. I’ve seen Tom be that good too without big names, and everytime I doubt the guy he proves me wrong. Plus his opposition is Mr. Flacco, and honestly I’m still not sold on him. He’s successful enough to keep his job, but I’ve rarely been impressed when watching him. Maybe it’s his weak receiving group. There’s also the Foxboro factor too, that seems to win them games somehow. I see Brady exposing Baltimore’s weak secondary in ways that the Raiders couldn’t last week. 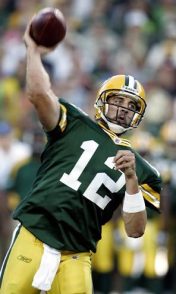 I’m kind of surprised I’m picking three road teams, but you have to go with your gut on playoff picks. Green Bay opened up a can of offense last week, destroying Arizona’s 2nd team everything. It won’t be quite as easy this time around. Arizona will surely play all of it’s playmakers, and they aren’t short on those. Their main question going into the game has to be their defnese’s inability to contain teams. Green Bay has proved they can put up points in bunches, and seem to be rolling as good as anytime I can remember this season. Rodgers has turned into the anti-first round flop pick, and been the leader that they hoped he would be! They also have a defensive leader in Charles Woodson. He has been all over the field and deserves to be the defensive player of the year. Woodson should be all over the field trying to confuse old man Warner and his receivers. If he’s a major factor in this game ie. picks, tackles, or sacks I like the Packers chances. I’d love to see a Minnesota Green Bay matchup next round, and that would mean that Philly also won!

I'm a dude that just hit 30 years old. Pretty much like everything that is funny, insightful, and has to do with the Warriors, A's, and Raiders. END_OF_DOCUMENT_TOKEN_TO_BE_REPLACED
This entry was posted on Wednesday, January 6th, 2010 at 1:13 am and tagged with AFC, Arizona Cadinals, Baltimore Ravens, betting, Cincinnati Bengals, Dallas Cowboys, football, Green Bay Packers, match ups, New England Patriots, New York Jets, NFC, NFL, philadelphia eagles, predictions, preview, Spreads, vegas, Wild Card Games and posted in Sports. You can follow any responses to this entry through the RSS 2.0 feed.
« Tim Raines, A Hall of Famer in My Book!
Doin Work Mailbag »