The Duke Finally Speaks Out on His Depression 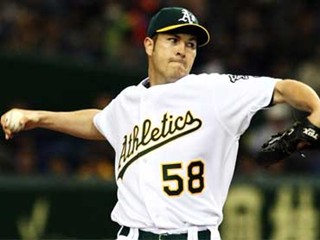 I had so many questions when Justin Duchscherer, the Athletics two-time all-star, decided to shut it down last August for the season. He seemed like he was on the road back to joining the A’s with a quality outing in Sacramento I figured he’d rejoin the team soon. Then out of nowhere he shut it down and cited emotional distress, aka depression. I was pretty curious what actually happened with him, since there were never reports on what it was truly about. The only updates A’s fans got were the ol, he’s making progress, he’s entered a program to treat his condition, etc. The A’s Drumbeat reports that the media phone interview with Duchscherer shed some light on his abrupt leave of absence from the organization. They said he was “paralyzed” when he got off a plane for a rehab start in Sacramento. It was the first time he’d ever felt that way in his life. He was diagnosed by the medical staff, and they found there were some off-field issues that had caused him to feel the way he did. In particular, he had never completely gotten over his divorce from a couple of years ago.

I think I can safely say for all of A’s fans, that we are glad he’s got his head right, because he is one of those guys that we need on this team. Duke has always been a fighter and we know he can make it through whatever is plaguing him. He’s never been a complainer or hard to please. They’ve moved him from a starter, to the bullpen, to long reliever, back to starter and he never complained (not to the media at least). He’s the whatever I can do for the team kind of guy, which was why the leave of absence last year was so strange!

It was good to see that we agreed to a new contract for him, and based on the interview this IS our best move we’ve made this off-season. He sounds like the anti-Favre as he wants to help the young guys and mentor them. He want’s to teach them how to pitch well when they don’t have their best stuff, and we know he will. Thanks for keeping it classy Duke, we are rooting for you this year. You are already my #1 feel good story in 2010!

I'm a dude that just hit 30 years old. Pretty much like everything that is funny, insightful, and has to do with the Warriors, A's, and Raiders. END_OF_DOCUMENT_TOKEN_TO_BE_REPLACED
This entry was posted on Sunday, January 3rd, 2010 at 3:20 pm and tagged with ace, Baseball, depression, healthy, Justin Duchscherer, leader, MLB, new contract, Oakland A's, Oakland Athletics, one year deal and posted in Sports. You can follow any responses to this entry through the RSS 2.0 feed.
« Gilbert is One Hell of a Prankster!
Mayo Spoils USC Basketball »

2 responses to “The Duke Finally Speaks Out on His Depression”