I Guess it’s Time For SJax to Go… 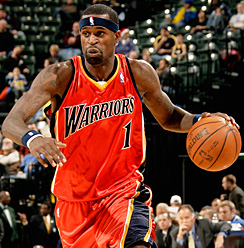 Well, since I’ve been following SJax from the start of his trade demands on DIME magazine, I guess I can finally admit he’s burned his bridges for dubs fans. We’ve been very tolerant of Jackson in the sense that he’s always played hard, and been a great leader on the court. I thought he’d actually show a little more respect to the organization that’s stood by him when many others wouldn’t. I guess even he is wearing out his welcome. It’s been hard for me to admit that Jackson is a cancer to the team, but this weekends events have shown me the light. I didn’t actually see his preseason game that earned him a two game suspension, but it sounded like a bitch move. Seriously, if you don’t want to play you don’t need to pick up five personal and one technical foul to prove it. He already made his point by demanding a trade, so why pour it on. I feel like the Warriors have pretty much done everything an organization can do for him. They’ve overpaid him, and pretty much handed this young roster over to him to lead. I guess that’s not enough , and I understand he’s frustrated, but he’s going about it the wrong way. The most amazing part to me is Artest now seems like the guy who has matured since the infamous Detriot slugfest. Artest has made slightly sane maneuvers (aside from not knowing that San Diego existed), but he didn’t take a ridiculously large contract like Jackson did, and now he’s playing with the champs. If Jackson really thought it through, he should’ve stuck with that old contract that was slightly more tradable. Now he’s just overpaid, spoiled, and selfish, which can only be traded to teams like the Clippers and Grizzleys of the world. It’s scary that all this is just starting to come clear to me. I’m not even caring what we get at this point even if it’s Zydrunas Ilgauskas’s dead corpse. He’s pretty much made his trade value lower than the Raiders franchise hopes. I’d like to see a deal done before the season starts, so his attitude doesn’t spread to the few positives we have going into the year.

I'm a dude that just hit 30 years old. Pretty much like everything that is funny, insightful, and has to do with the Warriors, A's, and Raiders. END_OF_DOCUMENT_TOKEN_TO_BE_REPLACED
This entry was posted on Monday, October 12th, 2009 at 10:17 pm and tagged with basketball, golden state warriors, NBA, SJax, stephen jackson, trade demand, warriors and posted in Sports. You can follow any responses to this entry through the RSS 2.0 feed.
« Freestyle Walker Gets Owned
WNBA is Doin Work »