Most media days for the beginning of the NBA season are pretty boring, but when it comes to the Warriors they always seem to have something interesting going on. It’s not a good thing, but I feel it was mildly better than last year. Last season they had a lot to talk about with, the direction of the team, the big contracts that they should have given to Baron over Maggette, and Monta’s scooter accident. Once again, Monta made a splash at the media day, and SJax had his fair share to say about his ongoing trade demands. All of the hoopla this season doesn’t really discourage me as much as last seasons distractions did. 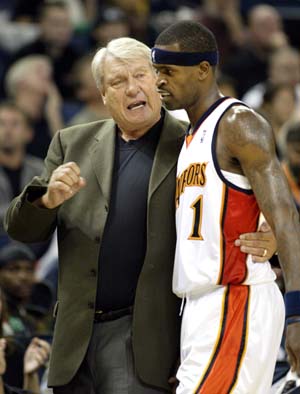 Well, since I’ve been following SJax on his rampage of trade demands, I’ll start with him. It sounds like not much has changed since his Dime Interview when he said he wanted to go to a contender. He basically reiterated that he did want out of Golden State during media day, but also verbally vomited on a few other subjects that I found interesting. He answered my question as to why he signed that extension just before asking to be traded, which was “Who’s going to turn down that money? I’m not stupid. I didn’t go to college but I’ve got a lot of common sense,”. I see his point of view as nobody would have given him that much, but if you really want to be on a winner why would you handcuff your team like that? Shouldn’t he have taken the Artest route and signed for less than what he was worth on a contender when his contract was up?! Honestly though, I don’t find SJax as being a distraction, because one thing is for sure, when he’s out on that court you know he will play his hardest. Whether he’d rather be somewhere else or not he’s just the kind of player that tanks games, he’s competitive and wants to win games period. If he doesn’t play hard for himself he’ll do it for his teammates, which is why I still agree with making him a captain. He played a lot of meaningless minutes last year and seemed to give it his all, so if we don’t move him I don’t see it being a big problem. For some reason he also spouted off about not regretting anything he’s done including going into the crowd with Artest in the Detroit melee. 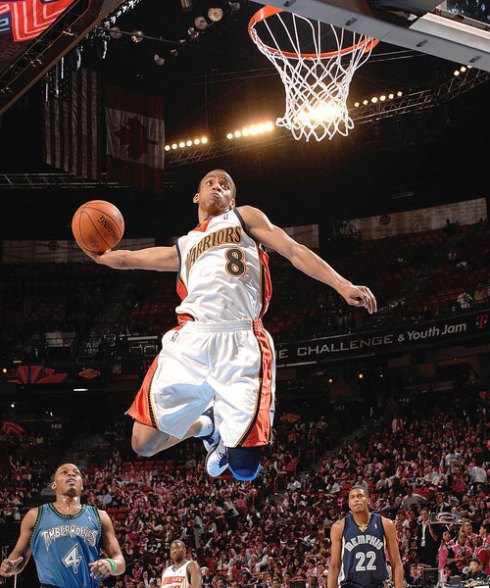 He felt that may have been one of the reasons the NBA picked to fine him $25K for his comments, and didn’t fine a guy like Kobe for making the same statement. Here’s the whole interview, but don’t take TK’s words too strongly he’s a douchebag.

Monta came out to talk with the media a little while after Jackson did. He usually is pretty boring in interviews, and rarely says anything of relevance. He started off good saying the right things just about winning, and how his ankle was 100%. He want’s to show everybody that his hard work over the off-season would made him better than he was before his injury. When asked about playing PG this year he kept re-iterating that he didn’t care where he played just as long as he was on the floor. He didn’t seem fazed by SJax’s situation either as he knows that when the ball is tipped off Jackson will be there ready to play. He also said that it’s Jackson’s deal to work out, so he can’t be concerned with it. 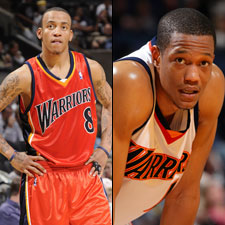 Randolph and Ellis ARE the future of the Warriors

The interesting /controversial part of the interview came next when he was asked about playing with Stephen Curry, their newly acquired first round draft pick. He stated that they couldn’t play together, because it’s not a way to win having two small guards on the floor. He was very adamant that it wouldn’t work unless there was a rare case that the other team went really small. I’ve had a man crush on Curry since before he took Davidson to the Elite 8, and for some reason drafting him was bittersweet as I knew in the back of my mind that we were going to be upsetting Monta, since before the draft he pleaded for the W’s not to pick a PG. Well, it looks as though it didn’t really upset him, but didn’t address any area that he felt they needed. He felt they’ll lose if Nellie goes small and plays them both. Here’s the rest of the interview with Monta, keep in mind that TK’s analysis is off the wall at times. Nellie already said that Jackson, Randolph, Biendris, and Ellis would be starters, but who is the fourth? Azubuike, Morrow, Wright, or Curry? Only time will tell, but I hope it’s Buike or Morrow. I’m not sure why I’m even worried about Nellie playing a rookie too much anyways! At least the Warriors problems this season are more on the court instead of off the court distractions!

I'm a dude that just hit 30 years old. Pretty much like everything that is funny, insightful, and has to do with the Warriors, A's, and Raiders. END_OF_DOCUMENT_TOKEN_TO_BE_REPLACED
This entry was posted on Tuesday, September 29th, 2009 at 12:11 pm and tagged with ankle injury, basketball, demand, Don Nelson, fines, future, golden state warriors, media day, Monta Ellis, NBA, roster, SJax, starters, Stephen Curry, stephen jackson, trade and posted in Sports. You can follow any responses to this entry through the RSS 2.0 feed.
« Don LaFontaine Tribute
Coaches Gone Wild, Part I: The Hawai’ian Rainbow »