Revamped In The Right Areas: The Raiders Draft Came Out Pretty Good… 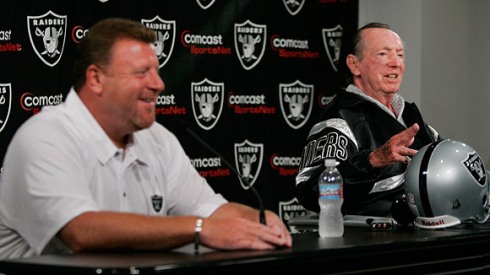 Match made in heaven? Sorry, you'll have to ask Rodger Lodge that one.

Wow, I never would have thought I’d say the Raiders had the best 2010 draft of their division, bus as I see it right now, we did! I wrote a week ago that I was scared as hell about what we’d do with our picks, because a lot of times, it isn’t always clear what Al was thinking or if he was really thinking at all. I’m not sure what happened in the draft room this year, but I have a gut feeling Mr. Burns let Cable give him some input into the picks. I mean, if Coach Cable is geeked to get a player, he must’ve had a hand in the decision. I have reserved high hopes this year. I could see them being the team that was good at the end of the year, or I could see them being terrible until it doesn’t matter and start winning then. Either way it feels like Cable does have a say in the teams decision making, unlike the past four or five coaches. Isn’t he the one that was highly against starting Jamarcus, and finally convinced Al to let him bench Russell. Cable knows how to reason with Al a little, and that is a rare thing, so I prey it keeps happening, so I can be excited about future drafts. Their best news is the guys we got wasn’t even the biggest news of the day. As Mceezy wrote about earlier. Who knows if any of these guys we drafted will work out, but I feel like we gave ourselves as good a chance at future success by picking some solid talent. Here’s how it all went down. 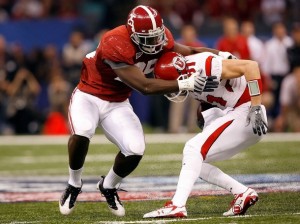 I’ve heard a handful of people say they didn’t like the pick, but if picking him got Cable geeked, then he must see him as our defensive leader on the field. If you caught any of Bama’s games last year, he was the motor of that Championship defense, and seemed to be in the right places making the right plays more often than not. He was also in charge of all their audibles and led them to the 4th ranked defense in the nation. I’m glad we didn’t take Bruce Campbell like so many people were saying we would that might’ve set us up for the Robert Gallery version 2.0. Lando is a pretty safe bet to be good in the league, and he better be since we traded away Morrison to Jacksonville for a box of cracker jacks to move up a round in this years draft. I think we should’ve asked for more, but I like the receiver we got with the pick, which I’ll get to later.

I wasn’t completely for this pick, but the more I thought about it the more I like it. The guy is durable, and can play in multiple spots on the line in the DT or DE spots. Weighing in at slightly over 300 pounds will make him a menace for any linemen to handle, especially since he does have speed, and one of those “motors” that Jaws is always talking about. Does that sound familiar to a guy we already have? Like say Richard Seymour. Seymour is the perfect guy to mentor him because he plays the same type of game that Houston does. It can’t hurt him to learn from the best in the business. This guy is good at stopping the run and paired with McClain it will be a much improved front line with a few less holes to run through. All in all, not a bad pick, he’ll look good in silver and black.

I really don’t know much about the guy, and if anyone pays attention to Hillsdale you are way more hardcore than me. I wonder if he knows Marty Mcfly or Doc Brown? I read some places that he might be somewhat of a project, but some think he’s going to be ready right away, so I’m at a loss on what to expect. 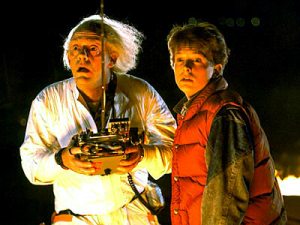 I was just happy they addressed a HUGE need. They had a swiss cheese O-line last year and QB’s paid with concussions. So whichever QB, maybe Campbell, we end up having behind center will now have a little more protection. I’m hoping this was a Cable inspired pick, because he used to be an O-line coach, so he should know how to evaluate one, unless he fell in love with Jared like McDaniels fell in love Tebow’s baby blue eyes.

Wow, this was a great pick! Rumors swirled that we’d take him with our first round pick, and we ended up getting the proclaimed combine king in the fourth round! We pretty much needed to redo the whole O-line, so taking two tackles in a row isn’t the worst thing in the world for us. I’m sure McFadden, and Bush cracked a grin when they picked two linemen in a row. Campbell comes from a zone blocking scheme, so he should fit in nicely with Cable’s plan. He has a checkered injury past, so hopefully he’s grown out of that. 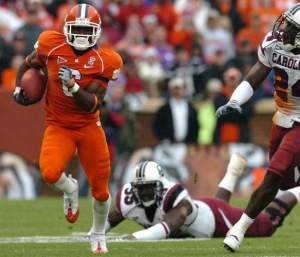 This is who we got for Morrison, well, and next year’s 5th round pick. I like the pick though, and if he turns into as good a player as last years 4th rounder, Louis Murphy, we could have some good looking rookies catching balls from Jason Campbell. Jacoby has been rightfully dubbed the fastest football player on the East Coast. He has a blazing 4.28 forty time, the fastest at the combine. It’s a number I’m sure was too good for Al to pass up. I’m not sure he’s going to be a great receiver, but he will most likely take over punt returning duties. He improved steadily while he was at Clemson, and had a pretty good season last year with 56 receptions for 779 yards, and 6 TD’s. He showed he has big playmaking ability, but whatever he does, I will always tie him to Morrison for the always fun, what if.

I like the pick. Some around the bay wanted them to pick Cal CB, Syd’Quan, but I think McFadden’s speed will help us from getting beat deep, which, if you watched Chris Johnson running around out there last year, you may have seen that was his weakness, getting beat deep. He has a high football IQ, and played in a man to man protection scheme for the Tigers. I could see him possibly starting the year if he catches on quickly, and if he’s as smart as advertised that 4.4 forty time will keep him from getting burned.

All in all a pretty good draft, we also picked Travis Goethel, ILB, Arizona State, Jeremy Ware, CB, Michigan, and Stevie Brown, S, Michigan. I’m not sure why we picked another linebacker that is only supposed to plays special teams, but we were pretty bad on special teams aside from our kickers so, maybe we did need a little upgrade. Not sure about Jeremy Ware or Stevie Brown, I was kinda hoping we’d take a flyer on Lagarrette Blount, but whatever.

I'm a dude that just hit 30 years old. Pretty much like everything that is funny, insightful, and has to do with the Warriors, A's, and Raiders. END_OF_DOCUMENT_TOKEN_TO_BE_REPLACED
This entry was posted on Saturday, April 24th, 2010 at 6:29 pm and tagged with analysis, Bruce Campbell, football, Jacoby Ford, Jered Veldheer, Lamarr Houston, NFL, NFL Draft, oakland raiders, picks, Rolando McClain, thoughts, Walter McFadden and posted in Sports. You can follow any responses to this entry through the RSS 2.0 feed.
« Raiders Swoop Up Another Leftover Quarterback
Game On The Line, Thunder Win. Literally. »

7 responses to “Revamped In The Right Areas: The Raiders Draft Came Out Pretty Good…”