Manny, Steroids, and the NFL Combine 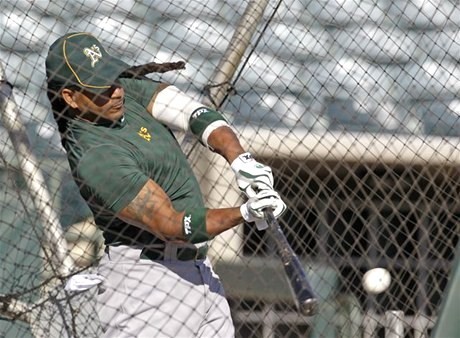 If you didn’t know, Manny packed up his estrogen and brought it to Oakland. The hysteria has swept over Oakland’s Spring Training in Arizona since he arrived Friday morning. I’m not sure if the bearded lady is a sideshow or the main attraction yet, but it’s become clear that the players are having fun with it using Mannyisms in their interviews whenever possible. I’m not sure why some people think it’s a terrible signing when he’s only making a prorated $333K after he serves his 50 game suspension. If he sucks, so what, they can just cut him. If he’s a cancer to the team, let’s face it, they probably aren’t finishing higher than 3rd in the AL West anyways. At the moment, I’d much rather watch Manny strikeout swinging as hard as he can than see someone else tap out on a weak grounder to the pitcher. If I thought the A’s were a contender, then maybe I’d be angry he’s taking atbats away from someone else, but at the moment that’s just a silly thought, so let’s see what the bearded lady can bring to the circus that is Oakland these days! The circus has for a moment taken over whatever the Giants are doing right now, so for a day or two at least Oakland is in the headlines over the Giants…

Lord knows I’ve never cared about players doing steroids, and if I did, I’d probably have to condemn my favorite A’s teams with the bash brothers or even more recent versions with Giambi and Tejada. When I heard about Ryan Braun’s negative test, I didn’t bat an eyelash. When his ruling was overturned, I didn’t bat an eyelash. When I heard Braun’s prepared statement, I felt like it was Rafael Palmiero waving his finger at me again, but didn’t truly care what his message was or what others thought of him. Whether he’s innocent or guilty, it’s obvious something happened that wasn’t right. The whole steroid era is overblown. It’ not like crappy players were all of a sudden good because they took steroids, they may have become average, but never great. The great players might be able to enhance their longevity a little, but who cares. I don’t watch games worried about who is using and who isn’t. I watch it to be entertained, and if PED’s end up being a part of that entertainment so be it. Hell, I don’t even care what message it sends to kids. Call me heartless, but if parents don’t instill to their kids that cheating is wrong, then they’re probably not that good parents to begin with. It comes down to a life choice for each athlete, and it should be their choice since they know the repercussions in the media and on the field.

I never watch the NFL combine (since I try to have a life), I’ve always felt it’s sole purpose was to keep NFL fans entertained with something during the off-season while players are poked and prodded in their underwear. Maybe if they had pads on doing some of the workouts would make more sense to me, but they choose underwear instead. As a Raiders fan during the Al Davis era you always had to look at the numbers coming out of the combine, because whoever had the fastest 40 time or could bench the most would most likely end up on our team at some point. Now that he’s gone and we only have two draft picks, I have zero reason to care what’s happening. The only thing that I really do think matters is their wonder-lick scores. No, I don’t really care if a player gets average or high scores, but I’d stay away from any player that scored low on the test, because it’s made for elemetary school kids. Other than that, look at film and call it good with making your picks.

I'm a dude that just hit 30 years old. Pretty much like everything that is funny, insightful, and has to do with the Warriors, A's, and Raiders. END_OF_DOCUMENT_TOKEN_TO_BE_REPLACED
This entry was posted on Monday, February 27th, 2012 at 12:01 pm and tagged with Baseball, Combine, Manny Ramierez, MLB, NFL, Ryan Braun, steroids, stupid and posted in Sports. You can follow any responses to this entry through the RSS 2.0 feed.
« Kenny Powers Taking You Into The Weekend
Seth Rogan’s Opening Monologue »

12 responses to “Manny, Steroids, and the NFL Combine”