Raiders Cut a 300 Pound Paper Only Costing Them $40M 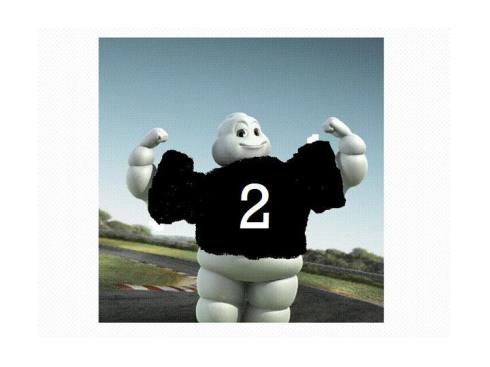 Well it’s finally been announced that the Raiders will give in and cut JaMarcus Russell. As Cali4Dre said, “they paid him $5 1/2M per win.” He was paid in excess of $39M, and will likely go down as one of the biggest draft busts of all time. It’s awesome that Al decided to do this, it took him a long time, but he is old, so I forgive him for moving slow. I was actually kind of scared that when Jamarcus was told he was being cut, he might have eaten Mr. Davis, and that was why it took so long. Anyways, the writing was on the wall for awhile, and it was surprising that it took Al this long to realize it. I guess that’s what happens when you don’t listen to anyone. Maybe he is starting to listen, because he had a sane draft, and seems to be making some quality moves. I just hope this isn’t a Jack Cust with the A’s, and they end up signing  JaMarcus back on for a discount. He’s wasted too much of our time to ever have him wear the silver and black again. Maybe he’d be a good fit as a lineman in the CFL or maybe, just maybe, there is some team stupid enough to sign him. Whatever his future, I wanted to revisit his top moments in the silver and black.

The 2007 Holdout – Russell held out until week 2 of the 2007 regular season to sign his monstrous $68M ($31.5M guaranteed) six year contract. It was well worth the wait, for him that is. I remember wondering why it was taking so long to get a deal done, and Len Pasqurelli at the time said “the long holdout seems to have garnered Russell a very advantageous payout structure. Of course, it also cost him any opportunity to win the starting job in training camp.” What?!? He wanted to start!?! I had no idea!

After the first glimpse of Russell under Kiffin – 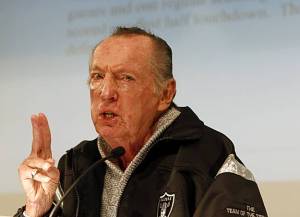 When Al Davis speaks, everyone listens. Whether it’s to make fun of him or if you’re a Raiders fan, trying to figure out what direction the team is heading. Make no mistake he WILL stand up for you if he’s on your side, and this day he certainly was on JaMarcus’s side. Good ol Al came to the podium to talk about the firing of Kiffin, and gave us this solid golden quote that will never be forgotten in the JaMarcus era, “I do realize that you did not want to draft JaMarcus Russell. He is a great player. Get over it and coach this team on the field; that is what you were hired to do. We can win with this team!”

JaMarcus’s work Ethic – In pretty much every interview he said the same exact things like; he was making progress; still getting used to the offense; (my personal favorite) the receivers weren’t getting open, and I’m trying to improve. Really?!? He was worse than Vlade Divac at acting, and I doubt he could even understand the playbook for Madden 2010 even after going through the tutorials. During the season everything was just as unspectacular as the previous season, and the team had given up when he was on the field. Following a 24-16 loss to rival San Diego (109 yards, 1 INT, 0 TDs) he said “I did a pretty good job.” In a 16-10 loss to rival Kansas City, JaMarcus was benched for a second time. “Things were going OK,” he said of his play (8-for-23 passing, 63 yards). Hmmm, I guess getting benched in the midde of a game is OK, and doing a good job means being on the field, and throwing at the running backs feet 80% of the time. He also was diagnosed with “lathargy addiction”. I dunno about you, but I have a serious case of that too from time to time, and about 100 million other people across the US sitting on their fat asses do too, the problem is, if $68M doesn’t motivate you, nothing will. Hopefully this disease can be contained before it’s a complete world epidemic!

Cable convincing Al – It was a weird time during Cable’s first season as their coach, but somewhere along the way he convinced Al that 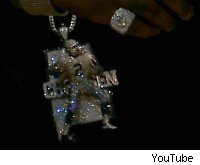 JaMarcus wasn’t the answer, and was finally allowed to bench the beastly waste of money. We went 2-1 with Gradkowski as a starter and it was even more clear than ever that JaMarcus sucked. It’s pretty bad when the TNT announcers are heckling you during a basketball game like Kevin Harlan and Doug Collins did saying, “if he spent as much time in the film room as he spent in the jewelry store, hed be a much better quarterback”. Cmon we know that the jewelry makes the man, er, quarterback!

One last chance – The Raiders were wanting to give him another shot coming into this season, but showing when he showed up to training camp adding another spare tire to the tune of 25-35 lbs. it just proved that he’d rather be compared to Ryan Leaf than the Raiders starting QB. We traded for Jason Campbell, so we won’t have to suffer from an incompetent QB, and I’m not so sure Jason is the answer, but there’s no way that it’s a downgrade! One tip, don’t try to make a comeback like Antoine Walker!

I'm a dude that just hit 30 years old. Pretty much like everything that is funny, insightful, and has to do with the Warriors, A's, and Raiders. END_OF_DOCUMENT_TOKEN_TO_BE_REPLACED
This entry was posted on Thursday, May 6th, 2010 at 2:29 pm and tagged with Al Davis, cut, eating, fat, football, holdout, jamarcus russell, lane kiffin, NFL, oakland raiders, sucks, Tom Cable, work ethic and posted in Sports. You can follow any responses to this entry through the RSS 2.0 feed.
« Tebow Slangin Some Jerseys’ Really Grinds My Gears
Byrnes Baby Byrnes »