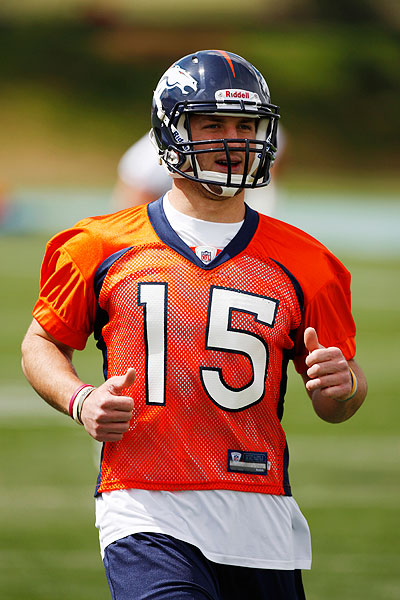 Tim Tebow hasn’t taken an NFL snap, and might not this whole season. I’m sure he’ll get in on some plays though kind of like his first year at Florida. The numbers on jersey sales came in from NFL’s website for the month of April, and Tebow was on top by a wide margin. I remember back when I saw Brady Quinn’s Right Guard commercial before he took a snap in the NFL, and it made me throw up a little. Mainly because these guys are already pulling in a ton of money from their ridiculous first round contracts and bonuses, then to top it all off they get a few extra million from advertising crap. Prove something to us before you start on the marketing campaigns. One thing I can draw from the sales, is that there are either a lot of religious people out there, or everyone in the state of Colorado and Florida decided to buy his jersey the second it was available.

I’m still as skeptical as the next guy on how Tebow will play in the NFL, and I don’t think it will work. Not just because I’m a huge Raiders fan, and want project Timmay to fall flat on it’s face, but because I wouldn’t have felt comfortable with him if he was on the Raiders. That’s the main way I decide exactly how much I think a player has to succeed. Do I want him on my team? No, not really, unless Jamarcus was still our starter. It feels like he’s got just about everything going against him in the media, and the “experts” analysis, so that makes me think he will want to prove those doubters wrong. If there’s one thing I know he’s good at, that would be proving people wrong with God as his guide. There is some irony to him picking #15 as his number. You replace Brandon Marshall, a perennial headache off the field, and now have #15 representing Jesus part 2.

I wasn’t THAT into Marble Madness, but it sure was challenging. I never had the patience for it. This guy, though, puts us all to shame. This has to be one of the greatest video game performances I’ve ever seen. I hate to think how many hours this fellow wasted to perfect his game, but you know what? It paid off for this exhibition of world-class marbling…. 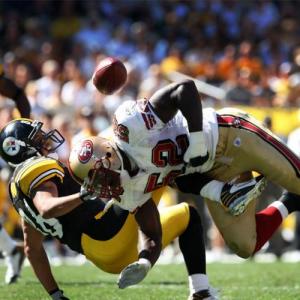 Being the resident 49er fan on staff, I must be the one to say … “It’s a celebration b**ches!”

If you haven’t heard, the 49ers just inked an extension with their best defensive pla … check that … best player in Patrick Willis!  I’m pleased on several levels here … for one, P-Willy deserved a new contract as he’s emerged as an elite player, one that opposing teams have to develop a game plan towards neutralizing every week.  Two, it’s good to see the 49ers organization reward a player for his hard work and dedication.  Since Willis arrived in SF, he’s led the team in tackles in each of his first three seasons, and has been selected to the Pro-Bowl every year.  He is one of the best defensive players in the NFL today, and now, he is paid like one.  To the tune of $50 million over five years with $29 million guaranteed.  Woot!

So all 49ers fans unite, and let us raise our glasses and toast!  Here’s to P-Willy heading a top-five defensive team in SF for the next five years … at the very least!

Who is Trying to Kill the A’s? Selig? Wolff? The Giants? Or the City of Oakland?

A common sight at the Coliseum, empty seats.

It’s no secret; the A’s have needed a new stadium for the past 15 years. What’s crazy is there’s still a few cracks from the 89 earthquake. I’ve wanted to break down the whole A’s moving somewhere situation, but I knew it would be a long winded effort. Since the Raiders moved back into town, the Oakland Coliseum has been less than adequate for a baseball team. Brad Ziegler recently tweeted that he was disappointed in the fans for not coming out, and why wouldn’t he be? The A’s sported the lowest attendance in all of baseball averaging a measly 17,392 per game last year. This year they’ve only played 15 games, but still have only averaged 17,056  per game. Ziggy later tweeted “I understand some come in late, but it’s frustrating to be at this level and know that at Triple-A (Rivercats), there are twice as many fans at the game.” I’ve been to both stadiums, and sadly it’s true, the Rivercats are a bigger draw in Sacramento than the A’s are in Oakland, and the crowd is probably louder in Sac too for AAA games. It’s also a reason Mceezy and I feel they would be a nice fit in Sacramento, but the feeling there seems to be that it’s too small of a market to support an MLB franchise. The Rivercats stadium was built in a way that it can be added on to easily, but I’m sure A’s Owner, Lew Wolff, has looked into that option, and most other possible options over the past seven plus years he’s been looking for a new stadium deal. The former owners pretty much sold Wolff the teams majority stake, because they were tired of getting rejected on their new stadium proposals. The saddest part is, that the few fans that are showing up, are being thrown out if they have negative signs ala Washington Redskins style. I don’t buy that Lew Wolff is a Sam Presti, so we can squash that rumor that he hasn’t tried in the city of Oakland. He wants to keep the team in the area, so I think or I’m sure he would’ve tried to move them. He reportedly released a 227 page book on his efforts to stay in Oakland from 2003-2006 when the Freemont deal sort of went through. Either way, the A’s need a new stadium somewhere, and whether that’s going to be in Oakland or not remains to be seen. END_OF_DOCUMENT_TOKEN_TO_BE_REPLACED