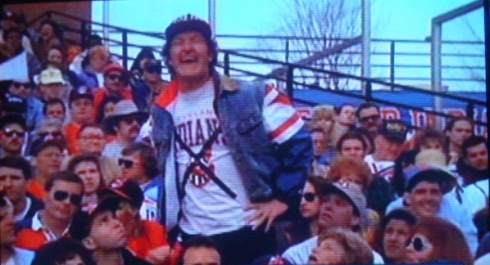 From the Los Angeles Times – Actor Randy Quaid and his wife were booked into Santa Barbara County Jail on Monday afternoon on felony charges connected to their alleged failure to pay a hotel bill, authorities said. Quaid and his wife, Evi, had previously failed to appear in court on felony charges of defrauding an innkeeper, burglary and criminal conspiracy, the Santa Barbara County Sheriff’s Department said. Both were booked in lieu of $100,000 bail, which they posted. The couple left the jail complex about 4:30 p.m. Monday, the department said.

This is too bad. Randy Quaid is three times immortal in my book. First, he became an instant legend in his role as Uncle Eddie in the National Lampoon’s Vacation series. Third, he played Ishmail in one of the Top Two bowling films of all time, Kingpin. Sandwiched in between those two landmark roles was a smaller part but just as legendary. Quaid portrayed a die hard Cleveland Indians fan in Major League, and anyone associated with that movie in any way is all right in my book. I’m not sure how they managed to rack up so many felony charges for simply neglecting to pay a hotel bill. They should’ve gotten it free in the first place. If the weirder Quaid showed up at my Inn, I’d gladly give him a place to stay.  You can’t just let Randy Quaid get munsoned out in the middle of nowhere!

Let's Go Oakland....clap, clap, clap clap clap END_OF_DOCUMENT_TOKEN_TO_BE_REPLACED
This entry was posted on Monday, April 26th, 2010 at 6:30 pm and tagged with baseball movies, major league, randy quaid and posted in Movies, Sports. You can follow any responses to this entry through the RSS 2.0 feed.
« Doin MLB Power Rankings
Just Wright »