It’s taken me a little while to collect my thoughts on the Raiders game, and I probably wasn’t coherent enough to write about it last night. All I keep thinking is, “I can’t believe they didn’t give up.” The first half was REALLY hard for me to watch, and I honestly thought they were about to get reamed worse than I did on the tables this weekend. It looked like Jamarcus threw on a #8 jersey and led the passing attack to 9 yards, but no, that was Campbell’s first half total. His throws were hitting feet and going over receiver’s heads, which made me think we didn’t have a shot. The refs weren’t helping much either botching calls, and making this game pretty stagnant when they couldn’t even figure out why they threw flags in the first place. The Chiefs first touchdown was the direct result of a pass interference call that the Raiders CB, Chris Johnson nearly intercepted. He had his head turned, beat the receiver to the ball, and for some reason there was still a 37 yard PI called. I’m still mad about that call. There were numerous curious calls in the first half that seemed to go against the Raiders a lot, and they were very fortunate to only be down 10-0 at the half. I thought they’d give up with all the bad luck they had, and would lose some confidence when there were some very questionable play selections like a McFadden pass into triple coverage, and a Rock Cartwright run on a punt fake on a 4th and 6, but they didn’t!

Then the second half started, and so did Jacoby Ford’s breakout party. I remember back when I wrote about the draft I thought he’d be a great return man, and yesterday he showed exactly how great he could be. I have no regrets handing over Kirk Morrison for the draft pick where we grabbed him. I thought he was somewhat one dimensional, but yesterday he showed everyone he might not only be a great kick returner, but he could be their best receiver we have. He sure was yesterday catching 168 of Jason Campbell’s 180 total yards passing including the catches that set up the tie in regulation and win in overtime. I’m not going to expect Ford to put up a performance to match this one anytime soon, but it makes me want to see him on the field A LOT more.

The other great thing about our offense yesterday was Darren McFadden. No, he didn’t have that amazing of a game (17 carries 89 yards), but he looked like a man possessed when he had the ball. I’d never really seen him looking for contact the he was yesterday. Any defender that came close to him he loaded up to either dish a hit or he tossed them aside with a stiff arm. I think all of his yards yesterday might have come after contact, okay, probably not all of them, but I’ll guesstimate over 50% of them.

None of the field goals or great plays by Ford would’ve mattered had it not been for our defense. We didn’t even have the services of the best corner in the league (Nnamdi) who sidelined with a high ankle sprain. 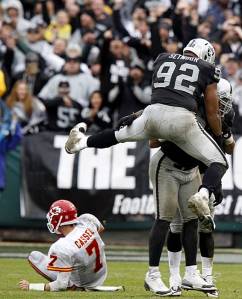 We lost middle linebacker Rolando McClain early in the 2nd quarter. We lost starting safety Tyvon Branch early in the third quarter, but none of that mattered as the game progressed. Richard Seymour led the D-line, and completely suffocated the number one rushing offense in the NFL. Our defense also forced two turnovers against a Chiefs team that only has turned the ball over four times all season long with one coming in the redzone, and the other from sure handed Thomas Jones. The bye week couldn’t come at a better time having a few guys get dinged up. Hopefully Gradkowski will be back as well in Week 10. I just find it amazing that I care about this team half way through the year! Even if they don’t win the division, they have already shown that they want to win baby!

I'm a dude that just hit 30 years old. Pretty much like everything that is funny, insightful, and has to do with the Warriors, A's, and Raiders. END_OF_DOCUMENT_TOKEN_TO_BE_REPLACED
This entry was posted on Monday, November 8th, 2010 at 4:31 pm and tagged with AFC West, big win, football, kansas city chiefs, NFL, oakland raiders, rivalry and posted in Sports. You can follow any responses to this entry through the RSS 2.0 feed.
« Doin BCS Bowl Projections
Doin Big Papi Sightings »