Raiders Sign Another Interception Machine… It Could Be Worse Though! 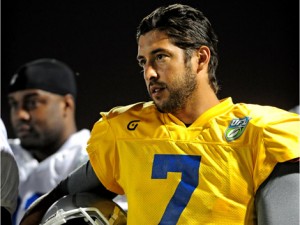 JP is turning in the yellow and blue for silver and black!

JP Losman is coming fresh off leading Las Vegas Locomotives to the UFL Championship, and is destined to battle with Gradkowski for the starting job, as he signed with the Oakland Raiders! I’m not sure he’ll play this week, but with Gradkowski injured that might be why he was brought in. Watch out Denver, we have someone slightly to mildly better than Jamarcus! I don’t think Losman will do much, but this all but reaffirms that Jamarcus will be cut at the end of the year. Raider Nation has been waiting all season for Al to give up on him, and this looks like it might be the last nail in Russell’s horrendous career, if you could call it that.  The organization finally had enough of Russell last week when he came into a 10-10 tie after Gradkowski was injured. He did his best to show he learned nothing from being benched. He got sacked his usual 50% of the time, and threw passes to the other team as much as he could with no receiver in sight. I think he threw it to Zack Miller, because he’s the only one he ever threw to accurately. I was glad he at least refrained from blaming the playmakers for not catching his balls 20 feet over their heads this week, which was his excuse when Bruce came in and won for them. Hopefully this will have to be the last rant I make on Jamarcus as he goes on his farewell tour… JP’s stats aren’t exciting, but one thing does stand out, his career QB rating is 10 points higher than Russell’s! I guess we’ll see how he does, but we all know it will be better than Russell.

Who would've thought this would be the last time he'd be #1 at anything! I guess, everyone but Al...

I'm a dude that just hit 30 years old. Pretty much like everything that is funny, insightful, and has to do with the Warriors, A's, and Raiders. END_OF_DOCUMENT_TOKEN_TO_BE_REPLACED
This entry was posted on Wednesday, December 16th, 2009 at 12:11 am and tagged with Al Davis, football, jamarcus russell, JP Losman, NFL, oakland raiders, play, quarterback, starting, United Football League and posted in Sports. You can follow any responses to this entry through the RSS 2.0 feed.
« Should the NCAA Tourney be Changed?
Tyreke Evans Show Going National Tonight »

6 responses to “Raiders Sign Another Interception Machine… It Could Be Worse Though!”