Last week was rough, but I can’t say I didn’t expect it. There were a lot of tough games to pick from, and since there were lot of the crappy teams had a bye week it made it even tougher. I went 2-4 last week, which brings my record to an awful 22-26 on the season. It has obviously made my picks look less than reliable at this point, but hopefully I’ll get some redemption this week picking a couple extra games. Too bad there’s a game tonight or I’d wait to put these picks up another day, but as always the home teams are in bold. 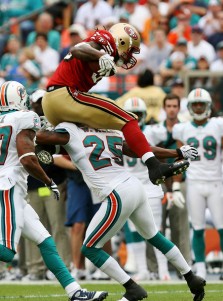 The 49ers and the Bears have both been very inconsistent this season and neither looks to be a playoff team at this pint, but then again everybody changes their mind from week to week… The 49ers have done well against very good teams, so I feel like they should pull this one out. Vernon even called their D-line weak, and said they were going to destroy them! Pretty strong words, but he later took back some of the thunder on Twitter which was disappointing. I think Chicago’s O-line is the biggest problem as Forte can’t get going and Cutler spends most of the time on his back. The 49ers kept Indy in check, so  I can’t see any reason they won’t against this cubs I mean Bears offense in check.

I can’t say Denver has done much the past couple weeks to make me overly confident in them, and it seems like nearly everyone has jumped off their bandwagon for the time being. Who knows though after this week everybody might be back on that bandwagon! The Skins however are the perfect team to get you back on track after a couple of rough losses. I doubt the Broncos, now struggling defense, will have much of a problem stopping this disastrous offense. Sorry no Zorn jokes this week. I think I’ve beat up on him enough in my other weekly picks posts! Pick Denver with confidence.

I’m kind of surprised that Cincy is a seven point dog in this one. The Steelers have played close games nearly every week, and haven’t been the model of consistency this year. Probably because everybody guns a little harder against the defending champs. I don’t see them covering against a team that is 5-0 as an underdog, which is exactly what this Bengals team is. I don’t think they’ll have the same kind of success they had against the Ravens, but I can see them winning outright, so there’s no reason not to take a touchdown’s worth of points! Pittsburgh doesn’t win these kind of games pretty, so I see this one coming down to a FG.

Not much to say for this one. The Aints are long forgotten these days in New Orleans, and they now have a team that looks like a super bowl contender! If you pick the Rams in this game, you WILL lose. This is my Miller Lite “can’t make the spread high enough pick of the week”. I could see the Rams putting up a fight, but as soon as that first quarter is over, it might be hard to keep it close from there on out! The Rams are the first team to earn two cheerleaders at the top of my picks… Congrats Rams fans! 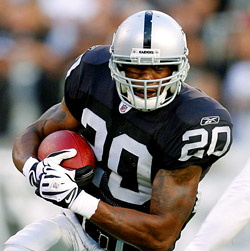 This pick goes against a lot of my personal gambling rules that I’ve made for myself, such as don’t bet on my team or bet on two crappy teams. Alas, I have to do it! This probably won’t be a “watchable” game for most fans, but the last time these two teams met, KC should have won the game, but blew it in the end. I can’t say enough bad things about the Raiders right now, but they are getting a few key guys back this week that may or may not help them including McFadden, Schillens, and Gallery. Every time I pick the Raiders to cover they lose, so maybe I can jinx my crappy team into a win as I’d rather lose the bet.

Well, I’ve gone back and forth on whether Arizona is for real or not. They like to mess with me by showing up only when I pick against them. Is that a sign to pick Seattle this week? Probably not, since Seattle hasn’t really shown that they can do anything well for very long let alone a whole game against a team that IS going somewhere. Warner can win a game with 5 TD’s for them and he can lose a game with 5 INT’s, and I don’t think the Seattle D has enough to get 5 picks. Boldin is supposed to be back as well, and I’m thinking since he’s been so pissed off that he didn’t play last week he’s going to have a big game against a not so great secondary.

I hate picking the Pats to win this game, because I truly do despise them. They have been playing very well lately, and it’s not just the offense, their defense seems to have finally figured themselves out! I don’t really want to pick this game since it is beginning to be a solid rivalry between the two teams that always plays out in the close game fashion, so I’m taking the points. It was hard picking with my gut instead of who I want to win. I think the Pats will be extra fired up to end the Colts unbeaten streak, and will have some Belichick surprises for ready. This should be the game of the week!