Memphis vs. OKC: Their Futures 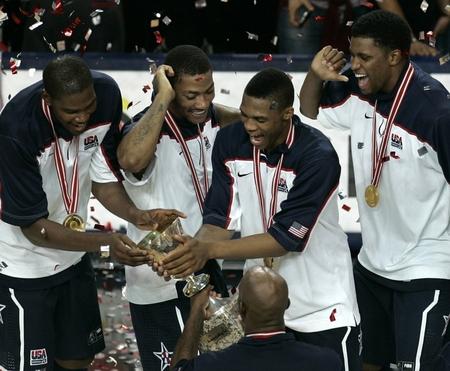 The theme of the NBA playoffs seems to be the youth movement. Aside from the Mavs, all three teams left are fairly young, and look like they’ll be around for years to come, which had me thinking more about the future than this year. Today I was looking at the Memphis and OKC rosters for the next few years, and there was one thing that stood out to me, how can they keep these cores together? There’s a couple of reasons I think a team like Memphis has a better chance than OKC at sustaining success for the next six years like say Miami and Chicago probably will too. The reason I decided to compare Memphis and OKC is because they are both small market teams that are very young. 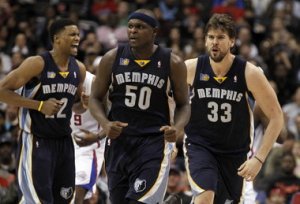 I’ll start with the Grizzlies, since it’s a team that for some reason has grown on me a lot over the season. What made Memphis successful this season? Their size and scrappiness on defense. Their size with Marc Gasol and Z-Bo is tough to match for any team. Z-Bo already got his extension, and obviously Gasol is going to be making more than $3M next year and every year after that, so Gasol is priority #1 for them this off-season. They have a bargain PG in Conley locked up for five years, who seems to be slowly getting better even though barely anyone had faith in him (myself included). They will also have Rudy Gay back in the lineup next year. He’s been labeled over rated, but if you saw him play much this year you’d know that isn’t the case, and he might even be worth his huge contract when it’s all said and done. The media talk about Gay has bugged me, because everyone seems to think he is Joe Johnson part II, when a) he’s five years younger than Joe, and b) he gets more steals, rebounds, and blocks than Joe (ie. plays defense). Am I the only one that thinks it’s obsured that people think they need to trade Rudy Gay? After Gay played with team USA on the gold medal run this year, he seemed to get it, which is a time when normally players seem to figure it out (mid-20’s) or be destined to never figure it out. Unfortunately for us (and him), he broke his arm during the last month of the regular season, so he wasn’t around this year in the playoffs, and now he should be traded!?! Really!?! My question for those people calling for them to trade Gay is, are you really putting a lot of stock in OJ (I play no defense and am a little crazy) Mayo. That’s what you’d be replacing Gay with in the long term if they’re building from in house talent. Tony Allen and OJ Mayo both feel like 6th men types to me, and you can find them elsewhere if you need to. Tony Allen is a shut down defensive guy, but is limited in offense. OJ is great when asked to help out the offense, but doesn’t play defense as we saw Harden torching him over and over. Gay plays both ways, and no, I’m not sure on his sexual prefrences, but I do know he works as hard on defense as his offense. He also made a few game winners this year if you didn’t remember, don’t you think he would’ve helped in that triple OT game when they needed a clutch bucket from anyone badly? I do, and think this is a team that hasn’t reached it’s full potential as Gay, Conley, and Gasol will all improve. As I said in the past, Memphis has a bright future for at least the next five years.

The curious case of OKC. They currently have a roster that has ALL their big names at or under the age of 22, which seems great on the outside looking in. It’s amazing to me that everyone thinks that everything will be great for them for the next decade when there will be a ton of franchise changing decisions on the horizon. It’s a team that has dealt with little as far as basketball careers go, since almost all of the important players except Perkins and Durant are still on their rookie contracts. What I understand about this team is this, Durant works harder than anyone on the team, he’s their best player, it rubs off on everyone else, etc., but does it rub others the wrong way on how he’s mister perfect? I’m asking Westbrook this question as I go along, because he’s the main player that you have to question within this team. Forget all the ill-advised shots he took against the Grizzlies, the real question becomes does he want to be Robin or does he want to be Derrick Rose (aka Superman) on his OWN team? 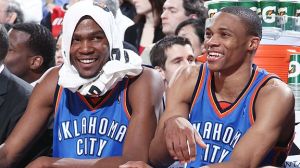 It's all fun and games till someone wants more out of the relationship than the other one does.

Does Westbrook have the Scottie Pippen and Lebron gene that says “I’m okay being the sidekick”? From what I’ve observed, I feel like Westbrook has more of an alpha type personality than Durant as far as being demonstrative on and off the court. At times we saw him ignore Durant during the game, which begs the question if we have to pick one, who is it? If you didn’t pick Durant your fooling yourself. Yes, I understand that the way this team was built was genius, and the envy of the league at the moment, but how sustainable is this team? They picked Ibaka, Harden, Maynor, and Westbrook all in the top five, and all of them are going to be asking for their paydays once they are done playing for these very friendly rookie contracts they are currently in. I think Ibaka just started playing hoops last week and is getting better by the game, so aren’t he and Westbrook going to command top dollar? Would they stay to play with Durant for the sake of winning or do either of them think they can do it on their own elsewhere? That might not even be the biggest question for them moving forward. Money is a funny thing that can lure anyone away from anywhere, and I’m sure Ibaka has some homies that need help in the Congo. Westbrook was born and raised in LA, and doesn’t it seem likely with his alpha type character he’d want to try to spread his wings on his own to see if he can lead a team like Derrick Rose is? I’m not saying that this team is going to get blown up for sure, but you have to wonder in a small market like thiers how big is that window. You’d think with them all being so young it would be a decade long window, but at the moment I just don’t see it being anywhere near that long. The Heat and Grizzlies both have their cores locked up for a lot longer than the Thunder do. The 2012-13 season might be their last hurrah as a group together, and if that’s the case, Miami and Memphis will still have their cores locked up for three more years after that. All I’m saying is that this groups window might only be three years, and I’m praying I’m right since I’d love to see Durant getting frustrated and leaving so his paychecks aren’t signed by Clay Bennett anymore…

I'm a dude that just hit 30 years old. Pretty much like everything that is funny, insightful, and has to do with the Warriors, A's, and Raiders. END_OF_DOCUMENT_TOKEN_TO_BE_REPLACED
This entry was posted on Monday, May 16th, 2011 at 5:02 pm and tagged with basketball, breaking up team, future, keeping players, Kevin Durant, Marc Gasol, memphis grizzlies, NBA, Oklahoma City Thunder, Rudy Gay, Russell Westbrook, young teams, Zach Randolph and posted in Sports. You can follow any responses to this entry through the RSS 2.0 feed.
« Can the Sharks Actually Come Through?
Stern’s Letter To Sacramento »

10 responses to “Memphis vs. OKC: Their Futures”