Sometimes you have to play 163! 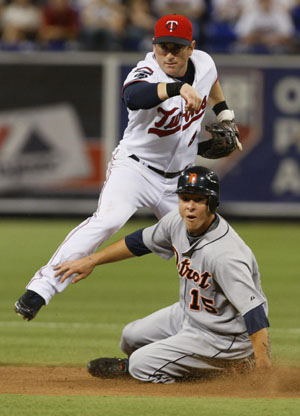 The Tigers could be struggling at the wrong time!

Somehow the Tigers have found themselves in a tie atop the AL Central after a mild implosion coupled with a red hot Twins team. This marks the third straight year that we will have a pre-playoff playoff game. This will be the Twins second consecutive year that they are playing in a tiebreaker game as they lost last season to the White Sox. The game will be held Tuesday in the Metrodome in it’s second farewell to the regular season. As today was supposed to be the last game played there, and 51,000 showed up to show their support of a great longtime stadium. Now they have one more game with the winner advancing to the ALDS ti face the Yankees. The Twins own the regular season head to head tie breaker between the two clubs, and have the right to home field advantage. The starters for the game will be rookie Rick Porcello (14-9, 4.04) for the Tigers, and Scott Baker (15-9 4.36) will be tossing for the Twins. I think this is the first time I’ve been even mildly excited about the MLB playoffs so far, mainly because whoever comes out of this game as the winner, I’ll likely be forced into rooting for them take the AL Championship.

It’s been quite an amazing run for the Twins since former MVP, Justin Morneau, went down for the season. They’ve picked up their game and have gone 16-4 in their last twenty games to give themselves one final chance to get in. 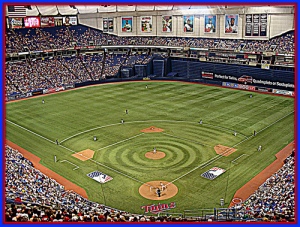 Home hankies will be in full effect Tuesday!

They’ve been getting contributions from everyone including decent pitching (not the middle relief) but overall effective, and some very timely hitting. Delmon Young hasn’t been a stranger to receiving  standing ovations  at the Metrodome lately. He has been coming up with clutch RBI’s in a lot of games, which is very reminiscent of  the way BJ Upton heated up for Tampa Bay in their playoff run last season. Joe Mauer has been quiet for his standards, but it’s mainly due to getting pitched around and walked more often. With this type of playoff push I hope this convinces MVP voters that Mauer is the obvious choice over Derek (I get way too much media hype) Jeter. When you look at the playoff matchups on paper, I think the Tigers would have a better chance of taking down the Yankees lineup wise, but the Twins are white label hot right now so it seems like you can never count a team on a roll out. As Billy Beane once said “It’s a crapshoot once you get in the playoffs, you just have to get there first!”

I’m predicting the Twins to win 5-4, and advance to play the Yankees.

I'm a dude that just hit 30 years old. Pretty much like everything that is funny, insightful, and has to do with the Warriors, A's, and Raiders. END_OF_DOCUMENT_TOKEN_TO_BE_REPLACED
This entry was posted on Sunday, October 4th, 2009 at 5:25 pm and tagged with 163, al central, ALDS, Baseball, batting title, Delmon Young, detroit tigers, game, Joe Mauer, Metrodome, minnesota twins, MLB, MVP, New York Yankees, playoff, Prediction, preview, Rick Porcello, scott baker and posted in Sports. You can follow any responses to this entry through the RSS 2.0 feed.
« Second Edition – Top Ten Chuck Norris Jokes:
Miguel Cabrera – And the Depressing 911 Call »