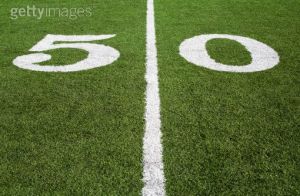 Throughout the season I will be try to predict the outcomes of the NFL spreads. I used to gamble quite a bit, and had good and bad times with it. I think I would’ve done better if I hadn’t gone for so many parlays, but that makes it more exciting. Anyways, I’ve never kept track over a whole season, so this should be interesting. The home teams are in bold, and the first team listed is the favorite. I will also be giving a confidence rating on my picks with a scale of 1-5. A one would be “I like me betting on the Raiders, because they’re my favorite team”, and a 5 would be “Parlay this one with any other 5 on the board” Without further ado here is the predictions.

3, It’s going to be tough for everyone going to Pittsburgh, but Tennessee proved last season that they are for real with their 12-4 mark, but are a fairly big underdog against the Steelers. The Titans have pretty much the same look as last year minus Haynesworth. They should be ready to at least cover in this one, since I feel like this line should be around -3. Plus, I have a feeling the Titans will want to pull out everything they have to get a win off the newly crowned champs.

4, I felt like the Dolphins were huge overachievers last season. They would

probably do fine in the AFC West, but in their division I think it’ll be a long tough road for them. Their first game is going to be in hostile territory against a team looking to see improvement through acquisitions and growth from their young QB. The Falcons should cover this spread with all the offensive firepower they have.

2, It’s always hard to tell how crappy a team is going to be. I doubt that KC will win this, but can you really give a guy named Flacco enough confidence in covering a two TD spread? I didn’t think so. KC will kill a few bettors at the end of this game scoring some points in garbage time. They seemed to do that well last year even with Thigpen.

2, this is a tough one. I don’t like it when the home team isn’t favored, but in this one I can’t argue. Carolina’s often stalling offense is always a roller coaster that I wouldn’t bet a replica ring on.

McNabb has two weeks to prove he is the undisputed starter, so I like Philly taking this one either by a good offensive effort or Jake Delhomme choking it away.

3, With all the drama in Denver this off-season it’s hard to tell what is going to come out of the once proud franchise. Saying they are dysfunctional is an understatement, but saying Cincinatti hasn’t had it’s problems isn’t fair either. I don’t like any team coming off as many problems and changes as Denver had this off-season, and they won’t figure it out until it’s too late.

5, Like I said before I don’t like road teams being favored, but I really can’t bet on a franchise that just named it’s starter today, Quinn. Cleveland didn’t make any upgrades and sorely needed to over the off-season. Minnesota should run away with this one. We could even see a chunk of playing time for Tavaris or a tryout from Anderson if Quinn struggles…

4, it’s Mark Sanchez’s first start as a pro, and I have a feeling that he’s going to get acquainted with Mario Williams early and often.

If the Jets had a solid running game or receivers that didn’t disappear, I’d give them a chance. Schaub is expected to go today, so as long as that stays the same I’m taking the Texans.

3, I think it would be impossible to pick anyone but Indy at home. Jacksonville usually gives them a good fight, but in a home opener it’s going to be hard for the Jaguars to pull it out especially with their disappointing 5 win campaign last season. I think the Colts will start the season as they usually do undefeated with a convincing win.

5, The question is when will the Saints be up by 13? First half? First quarter? Watch the bottom line or your stat tracker to see just how many they can put up. I don’t see the Lions 20 game losing streak ending in week 1 especially in a tough environment.

4, Tampa Bay is in shambles after barely missing the playoffs last year. They are doing an overhaul with minimal talent, so it’s pretty hard not to like the Cowboys in this one. Dallas will probably run a little more smoothly with TO out of the way. Look for the Buccaneers fans to be one of the blackout teams soon.

2, I really don’t know what to expect from this one. I’ll loosely pick the Niners to cover.

Arizona had an incredible season last year, but I don’t see lightning striking twice. It was kind of funny watching Kurt Warner fall to late rounds in nearly all my fantasy drafts. That has to say something about their chances.

2, it seems like the Giants start off strong and slowly fade away as the season wears on. If Eli had one good receiver, I’d probably bump up my confidence rating, but in this rivalry game it’s always tough to give a team nearly a TD. Washington just ends up being disappointing every season, and this year doesn’t look much brighter, as I see the Giants taking this one.

3, One rule I have is never to bet on crappy teams, because you never know what you’ll get. Seattle vs. St. Louis definitely fits that mold, and I can’t really give more than a TD to any team I deem crappy. St. Louis should make this competitive while they cover the spread.

4, I like the way the Packers look this year.

Rodgers has a lot of guys to throw to, and proved that he is going to be a good starter for years to come. The Bears have issues on defense especially against the passing game. I like the Pack to set the division tone with a convincing win.

4, If Brady is indeed back to 07′ form, we could see the stats that only a QB on Madden puts up. I don’t really see the impact of TO on the field overshadowing the gaping hole left by Lynch in the backfield. I think Buffalo is a decent team, but they are no match for the Pats in Foxboro on opening night. There could be two Monday night blowouts.

2, it’s never easy picking against your team especially when they are giving a TD plus, but the Raiders are starting to mirror the Timberwolves as their franchise spirals out of control. They have talent, but no direction. On a side note, I hope Gruden calls this game on ESPN, it would be nice to hear what he has to say about his former employer! Plus I caught him during a pre-season game and he was pretty funny.