Tigers Out Slop The Ducks 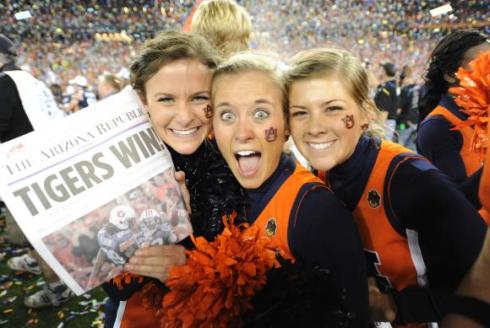 The National Championship last night had it’s moments, but for the most part was a pretty boring game, and it looked like both these offenses weren’t in sync, which was the opposite of what everyone was hoping for. I wanted Oregon to pull out the win or find some way to get the game into overtime, but instead we got one of the lowest scoring, and boring bowl games of the year. Congratulations goes out to the Auburn Tigers, too bad that trophy will be taken back in the next few years and nobody will really care that it was taken back, because we obviously know something is up with money going to Cam.

After watching this slopfest of a championship game, I couldn’t help but wonder if this game would’ve been much better if they had played it slightly sooner than 20 weeks after the season. Sports aren’t supposed to be played like this. I’m the kind of guy that complains when there are too many days between games in the NBA Finals or MLB World Series games.  I understand that Bowl games are a big part of New Years day, but why do we have to wait an extra ten days to put the National Championship game on? The simple answer is money of course. It’s like starting from scratch for these two teams though. We may as well have the game right before the season starts, because both teams looked like they were in week 1 for most of the game. Unless Cuban figures out some way to get us a college playoff, the only way to fight back will be to boycott the championship all together. Nobody buying tickets to the game, and nobody watching is the only way we have any hope of changing the crappy system. That being said, I can’t bring myself not to watch, so it looks like we will have to watch two rusty teams play for the National Championship every year for the rest of my lifetime…

I'm a dude that just hit 30 years old. Pretty much like everything that is funny, insightful, and has to do with the Warriors, A's, and Raiders. END_OF_DOCUMENT_TOKEN_TO_BE_REPLACED
This entry was posted on Tuesday, January 11th, 2011 at 11:28 am and tagged with Auburn Tigers, bad system, bcs, college football, National Championship, NCAA, oregon ducks, stupid and posted in Sports. You can follow any responses to this entry through the RSS 2.0 feed.
« Clippers-Warriors Game Thoughts
Doin The NBA’s Worst of the Worst Power Rankings »

12 responses to “Tigers Out Slop The Ducks”