Is Oakland Ready to Re-Claim The AL West? 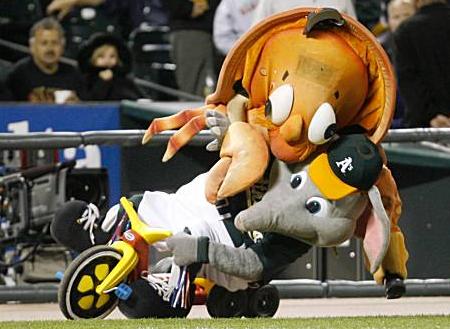 I can’t contain my excitement anymore. This is by far the most excited I’ve been about baseball during the offseason in at least three or four years. The A’s have made a lot of moves that made sense this offseason after last year’s overachieving team went 81-81 showing that sometimes less is more. We had less recognizable names playing for us, but did better than we have for a couple of years. I still can’t quite figure out how they won as many games as they did, but we found out what needed to be addressed, and all knew going into this season that they would finally have some money to spend with expiring contracts. I was skeptical that they would in fact spend that money, but they have shown so far they aren’t scared to make some moves. If they didn’t make the moves they did, I wasn’t sure how much longer I could give them the full on support that I have over the years. Yes, I understand they need a new stadium, and would love nothing more than for them to have a billion dollar state of the art park to call home, but there’s no way that will happen when they aren’t a competitive team. As MCeezy keeps saying build a winner then build a new stadium. Another point I’ll give him credit for, is they needed even more so than years past to make some moves this year since their across the bay counterpart just won the World Series. I mean really how tough decision is it for the fair-weather fans in the bay to make? Go to the ghetto Oakland Coliseum and watch a 2nd place team, or head across the bay bridge to the amazing AT&T Park watching the defending world champs? If I was one of the transplants that overtake the area, I’d be heading to SF. Of course the devil’s advocate would say, Lew Wolffe wants to move this team, and what better way to show the need than to tank in attendance. Thankfully it’s not the latter.

Okay enough ranting and onto the real reason for this post was why I can’t wait for this MLB season to start. First off another reason I’m looking forward to it is because there won’t be a lockout, so it might be the only sport to follow unless you love the financials of CBA’s. The A’s started the offseason by trading for David Dejesus, which shouldn’t be mistaken for a huge trade, but was an upgrade in the outfield getting a career .318 hitter, and a guy that usually stays healthy. Can’t say the same for any of the other 15 outfielders we have on the roster.

Our second signing will probably get some of the Asian demographic on board getting Hideki Matsui for a reasonable price. He’s not the most exciting signing in the world, but he does bring something that we clearly lacked, a player that can hit 20+ homers without striking out 300 times a season. He’s been a workhorse throughout his career, and is the opposite of the constantly complaining Jack Cust. He’s also not completely falling apart like some of the guys we’ve signed over the years with the exception of Frank Thomas during his resurrection.

Just days after the Matsui signing we picked up Josh Willingham in a trade. I loved this move as I’ve always liked Willingham. He’s a powerful guy when he gets the atbats, and with two powerful bats in the lineup, maybe they will produce enough to avoid those 1-0 2-1 losses they seemed to frequently have last year. It also gives us a little hope in those extra inning games of a walkoff homer instead of waiting for three singles to get that run. For an A’s fan, it felt like we signed Carl Crawford and David Ortiz this offseason. Not because we think they are THAT good of players, but because they never sign or trade for guys that aren’t over the hill (sans the Holiday deal). We still have some big holes in the lineup, and I’d like to see an upgrade at SS or 3B, but if this is all we do, I’m still happy with it.

The second wave of signings were all for the bullpen, which was a great idea backing up the awesome starting pitching they already have, and possibly one of them will end up being their 5th starter. When you lead the AL in ERA, you think there must not be much that needs to be changed. That could be the farthest thing from the truth, as their bullpen wasn’t actually that strong last season. The first addition was the return of Rich Harden. A’s fans have always had a soft spot for him, and it’s really the only place he’s had any success. This time around he’s going to be in the bullpen though hopefully keeping him off of the DL. They also signed Brandon McCarthy, who I’m not sure if they are trying him out for the 5th spot in the rotation or a long reliever.

They officially signed Grant Balfour yesterday, and I thought this was a GREAT signing. No longer will we have to rely on Michael Wuertz’s roller coaster rides to set up the end of the game for Bailey. I’ve never heard a bad thing about the guy, so no reason to not like the move. He also said of the team that they remind him a lot of the 2008 Rays, hopefully he’s right about that! He struck out the most hitters of any reliever last year against the AL East, so there’s no reason to think he can’t do it against the AL West. I have a feeling that Braden and Balfour are going to get this pitching staff fired up regularly.

Today they signed lefty Brian Fuentes. I’ll be honest, I don’t really like Fuentes. I loved it when he was on the Angels, and every time he came in the game there was a chance they’d lose. I’m okay with Fuentes in a set up role, let’s just hope he’s our lefty specialist and not pitching full innings, because I don’t want to be on that roller-coaster regularly.

All in all, this has been a great offseason, and there’s still a few months left to make some more moves. Do you see these moves making the A’s take over the AL West? I sure do, but I’m bias as hell…

Not sure if this is real or was set up, because I’ve never seen a fan able to just walk onto the court without security chasing him/her down. The way he went after the mascot deserved at least a tackle attempt from security. Anyways, this video sums up Cleveland’s season in a nutshell, and is just one more reason I put them at #1 in the worst of the worst power rankings. They even get owned by mascots…