It’s been a few weeks since we had our last power rankings up, and the landscape has changed a little now that we are about 1/5th of the way through the season. There were a few teams that fell out of the rankings, and some that moved up from the first power rankings we did. I’m really pumped that I haven’t had to put the Angels on the list. I think as long as Fuentes stays their closer that will help keep them off the list. Anyways, here’s how the top 16 shaking out.

#1 Tampa Bay Rays (22-10) – Getting zero hits and zero runs in one game doesn’t lose you the top spot, especially when it was the first time they lost two straight on the road all season, and it took perfection to do it. The Rays worst starter ERA is Wade Price’s 3.18, and is the reason they are doing so well. We will see if they can hold up when they start playing in their division more. If the Yankees hadn’t mirrored their losses, I may have moved the Rays down a spot.

Maybe if Brett Gardner played a little better they might be number one, haha, just kidding. I’m pretty shocked how good Gardner is doing, and if he keeps it up I’ll be mad I didn’t pick him up for the fantasy team. Swisher has been great lately too, which makes me somewhat root for them, because I love my former A’s players. They’ve lost a couple in a row, but there are no concerns in NY now that Texiera seems to finally be seeing the ball.

#3 Philadelphia Phillies (20-12) –After taking three of four from the Cards, and playing ten days in a row going 8-2 makes me think they must be the best team in the NL right now. Jason Werth wants that huge contract this winter hitting .329 with 26 RBI’s already! Their starting pitching is doing well as of late too only giving up 8 earned runs over their last six games.

#4 Minnesota Twins (21-11) – No Mauer, no problem. Wilson Ramos seems like he belongs as someone’s backstop in the league. He might be able to take up a few extra games behind the plate sliding Mauer to the DH more often, so he can stay a little fresher.  I don’t see why not with the way Ramos burst onto the scene last week (10 hits in his first three games). The Twins pitching has been better than I expected. They are +48 in run differential, and have allowed the sixth fewest runs, a good recipe for success.

#5 San Diego Padres (19-12) – I along with everyone are wondering when will they fade? Not anytime soon, if their pitching keeps going the way it has. They are tied with the Giants for the fewest runs allowed (97). They don’t hit for average or power, but they do lead the league in stolen bases, and seem to push the right buttons in their small ball approach. When Adrian Gonzalez starts heating up, watch out NL West!

#6 St. Louis Cardinals (20-12) – Albert Pujols is in as big of a slump as you’ll see him go in. He’s gone homerless for two weeks, and the Cards are still 8-5 over that stretch. With the Astros and Reds on the menu this week, they could have the best record in baseball by next week! Dave Duncan is the best pitching coach in the league, and is proving that with Piniero and Penny dishing out quality start after quality start at the back end of their rotation. They will need to start hitting sometime soon to take a little of the stress of the pitching staff.

#7 San Francisco Giants (18-12) – Big Time Timmy Jim isn’t getting any help from his bullpen during his last few starts. 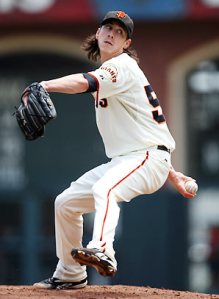 Overall the story has to be the four headed rotation they have going. Zito finally looks like he’s earning some of that contract money, and Sanchez is also pitching very well for the Giants. They are tied for the league lead in fewest runs allowed. A good recipe for success is not letting  the other team score, and the Giants have been great at that so far. Their problem, just like the Cardinals is scoring runs.

#8 Texas Rangers (18-14) – Elvis Andrus is getting on base at a ridiculous rate (.416 OBP), which is the second highest for an infielder 21 years old or under since 1947. Oh yeah, and they are about to get their best hitter back from the DL in Nelson Cruz. Things are looking good for the Rangers, on the field at least. They put in a four game sweep of the lowly Royals to take the division lead. The division is up for grabs with the Angels on the downslide, here’s to hoping the A’s and Rangers duke it out for the division title.

#9 Detroit Tigers (18-14) – Curtis who? Austin Jackson is the real deal, and only time will tell if he can keep up this torrid pace. I don’t think he will, but he’s a big time player and softened the blow of losing their centerfielder. Miguel Cabrera looks like he wants to have a career year, and has put the drinking behind him. Consequently, Jackson and Cabrera are 1-2 atop the AL leaders in average. Their bullpen is about as strong as anyone’s and almost all of them get close to 100 on the radar gun. It’s going to be great for them closing out games, and Valverde should have a lot more saves than he did in Houston.

#10 Toronto Blue Jays (19-15) – Who has more pop in their lineup? Nobody, the Jays have belted 51 homers on the season which is seven more than the next team Arizona. I’m not sure how long this will last, because they’ve had a ton of comeback wins. We know that’s not a way to achieve consistency, and eventually they won’t get all those late game heroics and will have to take leads earlier than the 8th or 9th inning.

#11 Oakland Athletics (17-15) – Dallas Braden’s perfect game was sweet, and if you didn’t notice we had three consecutive posts about it! This once again proves that baseball is where amazing happens. Anyways, the A’s open up a big stretch playing in Texas and Anaheim this week. We will learn a lot about this team playing their division rivals for the second time this season. It’s just a shame we have a no-win stadium situation.

#12 Washington Nationals (18-14) –  There’s a lot of teams that are shockingly in the top 16, and none are more of a surprise to me than the Nats. Okay, maybe the Padres are more of a surprise at 5. I honestly didn’t think I’d pay attention to them until Stasburg was called up, but low and behold here they are on two straight power rankings. Their bullpen has been amazing with Clippard and Capps finishing off games. Can they keep it up? Who knows…

#13 Cincinnati Reds (17-15) –  Brandon Phillips is continuing his resurgence, and has made up for that .200 batting average for the first 20 games, but now has six multi hit games since. I’m not sure it’s because the media is “letting” him hustle now (He told the media they were the reason he didn’t hustle to first). I don’t like their rotation, and how much they’ve leaned on Leake, so they are doomed to fall sooner than later.

#14 New York Mets (17-15) – Will David Wright stop striking out? Probably not, and the Mets will probably fall apart sooner than later. I’m not sure what to make of this team. They are good on paper, but paper doesn’t win you games. They do have a great bullpen ERA of 2.56. I see them hanging around the .500 mark for much of the season. I still don’t like Reyes in the 3 spot, he’s not going to be Hanley.

#15 Boston Red Sox (17-16) – They’ve finally cracked the .500 mark. It earns them a spot in the sweet 16. I’m not sure why everyone is knocking their power, they already have 43 homers, which is above the Yankees and Rays, and good enough for 3rd in all the MLB. Their glaring problem has been their pitching. I’m sure that Beckett will find his way, but he better find it soon, because the Rays and Yankees aren’t going to lose their way back down to them letting them into the race, the Sox will need to win their way back in it.

#16 Colorado Rockies (15-17) – I’m not sure how the Rockies don’t have a better record. They are +28, have solid pitching, defense, and offense. Maybe they are getting those unlucky breaks out of the way early in the year. They are notorious for the “late season push”. I think once Tulowitski and Street get right, they will skyrocket into relevance.

I'm a dude that just hit 30 years old. Pretty much like everything that is funny, insightful, and has to do with the Warriors, A's, and Raiders. END_OF_DOCUMENT_TOKEN_TO_BE_REPLACED
This entry was posted on Tuesday, May 11th, 2010 at 5:27 pm and tagged with Baseball, best teams, Boston Red Sox, Cincinnati Reds, Detoit Tigers, minnesota twins, MLB, new york mets, New York Yankees, Oakland Athletics, Philadelphia Phillies, power rankings, San Diego Padres, san francisco giants, St. Louis Cardinals, Tampa Bay Rays, Texas Rangers, top 16, Toronto Blue Jays, Washington Nationals, week 6 and posted in Sports. You can follow any responses to this entry through the RSS 2.0 feed.
« Welcome to Relevancy, Braden
The NBA Playoffs, Where is the Drama? »