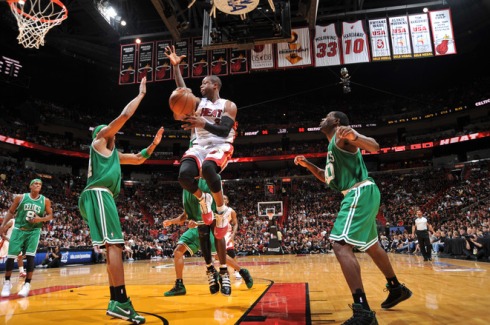 Sunday featured a full docket of NBA Playoff games to keep fans busy. I’m a little over 7/8 of the way through the quadruple header, and I’m going out on a limb to assume the Jazz will hold on to their 20 point lead at the time of posting. First, Miami was able to stay alive thanks to the heroic effort of Dwyane Wade. I got a sense of overexposure dating back to the Heat’s last Championship run – Wade was everywhere and got all the calls. But now that his team is a lower seed again, I’ve come to appreciate, once again, the will and ability of one of the game’s great players. D-Wade single-handedly took over the fourth quarter with a barrage of clutch baskets. He finished with 46 to make sure the Heat held on to this one to send the series back to Boston for at least one more game. 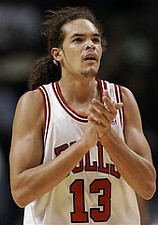 In Chicago, the Cavs ran away from the Bulls despite a monstrous effort from Joakim Noah. I had all the doubts in the world about this kid coming out of Florida. I didn’t see him ever becoming anything more than a role player, but today, he was the Bulls best player on the floor. Noah put up 21 points to go with 20 rebounds, and repeatedly came up with big buckets when other Bulls couldn’t. Problem is, too often were the times no one else could come through. On the other side of the ball, Lebron James was dominant once again, posting his fifth career postseason triple-double with 37 pts, 12 reb, and 11 ast. Mo Williams chipped in a couple huge three pointers and finished with 19.

In San Antonio, the 7th seed Spurs took a stronghold on their series with the Mavs, notching a 92-89 win to send the series back to Dallas with the home team in a 3-1 deficit. George Hill had a breakout game with 29 points to lead the way for the Spurs. The Mavs meanwhile looked like the same familiar disappointing team that continually fails to show up in the postseason. Jason Terry led a respectful comeback attempt, but the Spurs showed that they’re still the better team when the games mean something.

There’s still a lot of basketball left to be played in Utah, but barring a miraculous fourth quarter, the Jazz look poised to take a 3-1 lead back to Denver with three chances to close out the series. Deron Williams is building upon his legacy, further cementing his status as one of the top point guards in the league. Also, Carlos Boozer is showing that he can still be a dominating force in the post, something that teams with cap space will certainly be looking to add to their roster in the upcoming offseason.