Can the NFL Survive a Blow From the Recession? 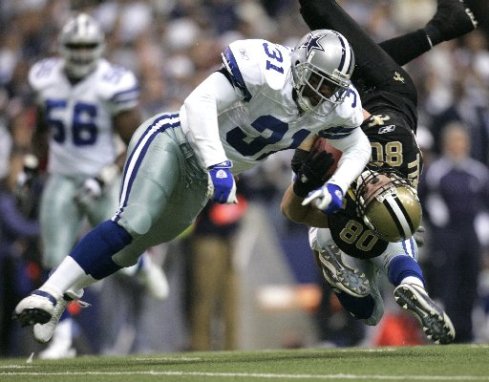 I wrote my plea for the NFL to change the Blackout rule, because it’s robbing the fans of seeing the home teams play, and further detaches the fair weather fans and people that happen to move to a new area that features a franchise. The NFL is holding it’s cards close as they insist they aren’t in bad shape financially, and are recession proof. A report from Forbes came out today that showed the NFL was telling a half truth, as they are okay, but the future is fairly uncertain. Their $1 billion in equity plus debt average among the teams has not changed. The bad part of the report was that eight franchises declined in value for the first time in 10 years! Not surprisingly my Raiders were the worst on the list decreasing 7% from last season, and as of now the Lions are even worth more than them. There were good playoff teams on the list that declined as well including the Colts(-5%), Dolphins(-3%), and Falcons (-2%). The factors that the findings were derived from were; the decline in people who could afford to purchase or invest a franchise, lowered revenues and lower revenue expectations, and the tightened credit markets.

The all powerful NFL isn’t too worried that a quarter of their franchises that have dropped in value as they get huge revenues in the $7 ½ billion range for all their assets. Their TV deals with ESPN, NBC, CBS, FOX, and Sunday Ticket on DirecTV alone give teams a whopping $116 million per year. Facing obvious challenges in the near future the NFL extended their TV contracts recently for two more years through 2013. The drawback to the agreement was that there was a very low 2% increase per season. The real problem for the NFL looks to be the new collective bargaining agreement that was supposed to go through 2012, but the owners voted unanimously to opt out at the conclusion of the 2010 season. Many owners have complained that they’ve had to spend over half their revenues to pay the players, and when there are jackass’s like Michael Crabtree out there squabbling over his contract it all becomes clear why their gripes are justified. Who knows by the time Crabtree gets a contract there could be a lockout, one more bad reason for players to holdout. I still can’t fathom how players are worth millions before they take one snap as a pro. Next year for the first time since 1993, the NFL will play without a salary cap.

This sounds like an instant lockout by the owners, if this is allowed to happen. I doubt too many owners will be thrilled to compete for players against teams that turn the most profit like the Redskins ($90 million), Patriots ($70 million), and Buccaneers ($68 million). I guess Tampa might fall off this list as they are due to be one of the teams this season that could not sell a home game out, and fall under the retarded blackout rule. They once had a 100,000 person waiting list to get season tickets, but those days are long gone as they hope to fill up the stadium for eight weeks out of the year.

We will see what happens, but you can bet that the NFL isn’t ready for what is coming. I have a feeling that they are under estimating their worst case scenario, and shouldn’t be telling the public that everything is all good and happy times. Goodell is good at doing the PR through as his sleazy car salesman act has fooled me from time to time. I hope it doesn’t stoop to the NBA’s depths, which I wrote about a couple months back. If teams are close to bankruptcy, and are having to borrow money I’ll be the first to say I told you so. I know with the recession comes cutbacks by everyone feeling the wrath of the mighty economy, and that translates to a lot more empty seats, which keeps snowballing as a lot less concessions are being bought. I’m sure that in these unforgiving times less people are willing to pony up the money for that ridiculous DirecTV Sunday Ticket package. If people can’t afford tickets, then we can’t even watch our favorite teams on TV from the blackouts. Looks like we’ll have to suffer as we watch the Giants, Jets, Patriots, Redskins, and Cowboys during our blacked out games. I’m already depressed thinking about having to watch Romo and Eli more than they were regularly scheduled!

The Worst Sports Franchises of All-Time

As I read Simmons plea for Blake Griffin to run and hide from the Clippers, which probably isn’t the worst idea for him on the day of the NBA draft, I pondered what a list of the worst franchises of all time would look like. It’s not hard to think of a lot of really crappy teams, but narrowing that list down is tricky. The fields accounted for are; what they’ve done over their whole franchise’s history and to their fans. According to business journal in 2008 the worst five rated franchises (NBA, MLB, NFL) from worst to best of the worst were: Detroit Lions, Memphis Grizzlies, Pittsburgh Pirates, Minnesota Timberwolves, and the St. Louis Rams. Financially I couldn’t agree more, because I don’t know their books or care to.  However, I do believe that some of the teams listed abouve are trying to do the right thing for their franchise. Well, atleast enough to stay out of the top five worst on my list.

#5 Memphis Grizzlies -They’re trying to make it to the Clippers status, but it’s tough to make up all those losing seasons that the Clips have on them. Their first four years

yielded them a total of 56 wins in Vancouver, so why not move to Memphis! That move, coinciding with dreadful drafts have doomed the franchise to the depths that they are currently in and will be in for some time to come. Even this year with the second pick, they may have to settle for a role player since there is no clear instant NBA impact player in that spot. I’m sure this draft will yield them their next Big Country Reeves. When they do have a good player, they find a way to trade them for a poo poo platter of players and draft picks that they will eventually mess up on! I’m not just referring to the Gasol trade last year, but they also traded away Mike Bibby and Steve Francis just before their primes! Is OJ Mayo the next?

#4 Pittsburgh Pirates – Well, they have a nice park, and well, that’s about the only exciting thing that’s happened to them over the past 17 years. Since 1992, the Pirates haven’t had one winning season, and it doesn’t appear that one is coming anytime soon. They are now the proud owners of the longest string of losing seasons by any team in MLB history! Is it the curse of the Killer B’s (Bonds and Bonilla)? My guess is they are cursing themselves by continually trading players for prospects and never really letting any player play for any part of their prime.

#3 Los Angeles Clippers – Not only do they make the worst decisions possible, but every time they make a decent one it never works out. Their .365winning percentage in the Donald Sterling era shows their inability to make a streak of good decisions. He’s more interested in what prostitute’s he’s bringing to the game that night than who is on the court for his team. The dwindling fanbase has gone into a depression that may not be shakeable until they decide to move to their fourth location. The seats have been emptier and emptier as the seasons go by, except when the Lakers come to town to play them… I think Billy Crystal even stopped his season tickets this past season (don’t quote me on that, maybe he just didn’t go very much).

These Kids are lucky they don't know how bad their team is yet!

#2 Kansas City Royals – Owner David Glass should give the name “owner” an apology. He likes to play the small market victim card whenever he can, but he is always the first person in line begging to receive some of the revenue sharing from the commish. They never re-sign a star, and never puts a team on the field that is remotely competitive. Any team that averages a whopping 96 losses per season may as well make their vacation plans for October in April! There should be someway to kick out owners out of a league if they aren’t don’t even trying.

#1 Detroit Lions – It’s hard to pick exactly where to begin, but they capped off the number one spot with the first 0-16 season in NFL history, and only one playoff win since 1957 just shows the meaning of their sucktitude. It takes talent to construct these aweful teams. It must be fun for them to constantly have fans on the edge of their seats and brown bags over their heads wondering what terrible decision their franchise will make to set them back (insert amount of years). This continual three to five year re-building plan  just makes me feel happy that there are people messing up franchises more than Al Davis is for my Raiders.