Oakland Athletics – They swept the Angels in a quick two game series, and also swapped positions with them to be in a tie for first place in the AL West for the first time this season. That didn’t last long as they lost two straight to the struggling Twins and were promptly sent back to 2nd place. Their offense has gotten progressively better over the last week and a half. 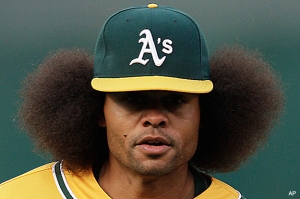 They’ve actually averaged nearly 5 runs a game over their last 10. I don’t think it’s a coincidence that Coco Crisp has been getting on base, stealing bases, and scoring runs. When he does well, they seem to score a lot more runs. Their pitching has still been their crutch to lean on. They lead the majors in ERA at 2.68, which is the only sub-3.00 ERA in all of baseball besides the Braves 2.88 team ERA. Andrew Bailey is getting closer to returning, and will be a welcomed addition to an already great bullpen.

San Francisco Giants – Giants are sitting pretty at first place despite playing average ball.  So there’s not much to complain about here, furthermore, they just did a mini sweep of division, no everything rivals LA in LA.  So a major f**k yeah for that.  The Mark DeRosa injury could be looked at as a down, but I see the positive in it.  For one, he was hitting like s**t.  Second, we’re too deep not to circulate other players in and out of the lineup, giving tough-minded guys like Mike Fontenot a shot at some p.t.  Hopefully DeRosa takes this time to clear his mind, and find his swing.  Finally Madison Bumgarner finally got his first win of the season, the Giants are on the up and up from here on out.

Oakland Athletics – Hideki Matsui hasn’t really shown much promise thus far in the season. Maybe the inconsistent playing time has something to do with it, but I feel like there’s a chance he might just be old. Dallas Braden had season ending shoulder surgery, which was a downer but not unexpected. I’m a huge Tyson Ross fan, and he’s done admirable filling in since Braden went down, but he got injured, and apparently Brandon McCarthy did too, so that’s a hole in the rotation. Maybe Harden will eventually not be hurt or maybe another round with Outman wouldn’t be terrible. Bob Geren is still making questionable lineup/bullpen changes and tinkering that seems to prevent the team from keeping their continuity, but the players seem to be overcoming the handicap of having him as a manager, which must be one tough obstacle.

San Francisco Giants – I can’t complain about much these days, perhaps the injury to Pablo Sandoval has put a damper on our inconsistent hitting.  I’m not satisfied with Tim Lincecum’s 3-4 start.  I was hoping for him to be blazing toward another Cy Young early on.  But those are all ‘whatevers’ in my book.  The Giants are in first in the NL West, and this should lead to an interesting series with the A’s.

Next Up – The battle of the bay. Inter league play starts and the battle for bay area bragging rights is on the line.

Yeah, no hard feelings a quarter of the way through a season!

We always try to bring you cool Asian stuff as we run across it. This game is called Botaoshi, and is a new one to me. I guess the goal for the team with the pole is to keep it upright, and the other team is trying to get the pole to the ground. I always find it refreshing to see a sport without a ball. It’s a little less structured than the fight league, but a very entertaining minute of play nonetheless. I’m not sure why it helps the team protecting protecting the pole to have the guy on top, but there must be something to it since all the other youtube clips I watched employed the same strategy. I can understand why there’s a minute time limit on this game, seems like if it went much longer everyone would be too injured to go on.