It’s been a entertaining NBA playoffs thus far. Teams that we thought were favorites aren’t turning out to be the powerhouses that we originally thought they were. Like I said back on 4/20, there’s a changing of the eras in the NBA. I didn’t think it would be this year, but thought it was on the horizon. More and more it’s looking like this year is the year of change. Another good thing is I don’t think any of these series are rigged so far. Well done Stern, usually we can tell!

Mavs 2, Lakers 0 –  As they say once the home team loses the series really starts. I think someone forgot to tell the Lakers that the series started after game 1. Last night’s Lakers game was disturbing to the fans down here in LA, much to my enjoyment. It’s fitting that this is the first year I was somewhat rooting for them because I didn’t want any of the Eastern Conference teams to win it all. I can’t believe I admitted that, but yes, I was rooting for the Lakers a little. I am enjoying that some Lakers fans said they would win the series in 3 games against this soft Mavs team. Obviously, that can’t happen, but it was an indication of how they overlooked Mavs in general. Maybe the players were listening to the radio shows and got full of themselves or maybe this team is just plain dysfunctional. I won’t call this series done, because the Mavs have a long history of choking in the playoffs when the pressure is at it’s highest. The pressure of closing the Lakers out is going to be big, and close to the pressure of closing the Heat out in the Finals four years ago. That Mavs team was much different though, they have only two players from that finals roster, and were much softer without Chandler. This version of the Mavs feels a lot better, but I won’t believe it until they close out this series. Either way, the winner will lose next round to one of the young guns in the changing of the guards. 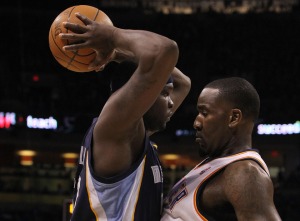 Memphis 1, Seattle 1 – Everyone thought the young team that would make an impact out West was going to be the Supersonics when it’s really been the Grizzlies who have shocked the world. I didn’t pick the Grizz to win that first series against the Spurs, especially without Gay in the lineup, but did think they were a good team all the way back in November when I regretted leaving them off my playoff predictions. Both franchises have figured out how to build a contender, and they have one glaring thing in common, size. Size matters in the NBA, just ask Steve Nash. It was always the Lakers biggest advantage for the last three years, and what do teams have to do to knock them off? Get bigger. Memphis did that through free agency and trades (Gasol, Z-Bo). Seattle did the same (Perkins, Ibaka), and now both teams look like they could beat anyone with solid role guys and their stars knowing exactly what is needed of them to be successful. I’m going to say whoever wins this series will be representing the west in the finals. I’m rooting for it to be Memphis, because I still have a hard time rooting for Sam Presti to succeed on any front.

Miami 2, Boston 0 – The team I picked to represent the East is looking about as good as it has all season. I thought that Boston was in trouble before this series started. Wade ALWAYS gives Boston fits, and that’s going back to when Wade was the only player worth anything in Miami. Last year I think he dropped close to 50 one playoff game in Boston to help the Heat avoid getting swept. Now that he has Lebron and Bosh who can also give Boston fits, he no longer has to put up 50 to will his team to a win. What’s even scarier about this Miami team is they look more comfortable playing together than they have all year. The Celtics on the other hand look a lot like the Lakers this postseason. They haven’t really looked good for more than one or two games the whole second season. They know it’s their last shot with their great coach, and might be pressing a little too hard or could just be old. Is it a lame duck coaching situation for Boston and LA that’s getting them down? Are they not playing as hard because they know there’s a new coach on the horizon after this season? Probably not, but I have to throw it out there. I guess this series hasn’t started yet since the home team hasn’t lost, but this video seems to sum up how high people are on the C’s right now… 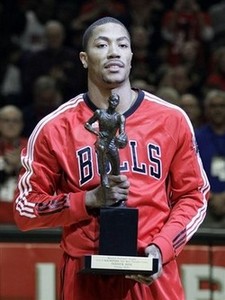 Chicago 1, Atlanta 1 – Of the teams left in the playoffs, I’ve probably watched these two teams the least. I’m not sure why, but I was never totally sold on Chicago. Derrick Rose’s ankle is what this series hinges on, and personally I think getting the MVP is a jinx. No guard since Jordan has won a title the year they won the MVP. This day in age only big men that win the MVP get championships. Like I said before, I haven’t watched Chicago a lot, but is there anyway their defense is overrated a little? Indiana and Atlanta aren’t exactly offensive juggernauts ranking in the middle of the pack in the NBA, but are putting up over 90 in the playoffs where scoring is usually down against the unbreakable Thibodeau defense. Atlanta is the toughest team for me to figure out. They blow teams out, and get blown out just as much. You’re never really sure what you’re going to get from them. I can’t figure out why they went away from Jeff Teague, who was lighting Chicago up in game 2, but that happened, and they didn’t come close to winning. I actually like a lot of Atlanta’s players, but for some reason just can’t seem to talk myself into rooting for them. Don’t they feel like they are Mavs of the East? Good enough to be in the playoffs every year, but not good enough to go very far…

I'm a dude that just hit 30 years old. Pretty much like everything that is funny, insightful, and has to do with the Warriors, A's, and Raiders. END_OF_DOCUMENT_TOKEN_TO_BE_REPLACED
This entry was posted on Thursday, May 5th, 2011 at 12:22 pm and tagged with atlanta hawks, basketball, boston celtics, changing of the guard, Chicago Bulls, dallas mavericks, los angeles lakers, memphis grizzlies, Miami Heat, nba playoffs, Oklahoma City Thunder, young teams and posted in Sports. You can follow any responses to this entry through the RSS 2.0 feed.
« Elephants and Seals
Let’s See How Far We’ve Come »

16 responses to “Playoffs Getting Interesting…”