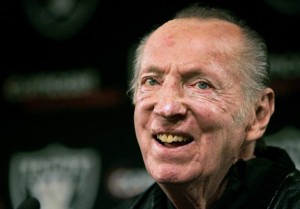 Even Al is cracking a smile!

Yes, the Oakland Raiders finally can say they’ve won two in a row. It predates Doin Work’s existence, and is the first time that it’s happened since 2008 when Jamarcus made us think he was improving. This time it’s much different though as we are actually in the divisional race. We’ve looked good on both sides of the ball, and I think the guys are finally starting to believe they can win. McFadden finally has decided to be one of those elite backs we were all hoping he would be. Yesterday was the first time we’ve put up 500 yards of offense since 2002 when we had Gannon. It’s also the first time we’ve had fantasy relevant players! Heyward-Bey finally got over the century mark in receiving yards for a game, and scored his second career TD. Our defense has been sacking QB’s at an amazing rate, and already have 24 on the season witch is good enough to tie the Giants for third in the league. They are ranked 9th in defense overall, and getting pressure on the QB has helped the not as good corner opposite Nnamdi look a little better. The offense hasn’t been explosive per say, but just efficient enough, and chewing up enough clock to keep our defense from being tired like they were at the end of every game last year. That has been the biggest difference this year by a long shot. It feels foreign to me to see them actually improving from week to week instead of improving then regressing. I’m happy to say that my prediction for them making the AFC Championship game is still alive 8 weeks in. This weekend we have a huge divisional match up for what could be a factor in deciding the division as they take on the first place Chiefs. Thankfully this match up is at home and is supposedly sold out, so it should be on TV for once! Another thing I’m starting to love about these wins is it’s pissing off Patriots fans because they see their possibilities of having a top ten pick next year dwindle by the week!

Watching lots of NBA action, and I forgot about a team in the West…

Since we are all blessed with the NBA League pass for the first week of the season for free, I ended up seeing quite a few teams that I normally don’t get to see much since they aren’t contenders or in a big market. A few teams impressed me like Indiana, Portland, New Orleans, and Sacramento, but one team made more of an impression on me for some reason was the Memphis Grizzlies. Are they actually a good team? 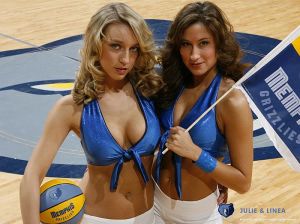 Memphis was nearly .500 last year, but I wasn’t really sure if they were a “good” close to .500 team or a “lucky” close to .500 team, since I didn’t get to see them play much. I watched good portions of them beating Dallas and Minnesota over the weekend, and have to say that this team actually has some solid potential. They got 22 steals against Minnesota, and pretty much dominated them. Dallas they snuck away with a victory, but got the W nonetheless. This team is very young, but they have all their starting spots filled with quality guys that are just entering their 2nd or 3rd seasons. Even though I don’t see any of them being superstars, much like OKC they have a solid core of young talent that likes playing with eachother. Everyone knocks Rudy Gay, but the guy was clutch against Dallas, and if they have a closer, they already have more than some teams. OJ Mayo is a great scorer. He’s not as exciting as I originally thought he’d be coming out of college, but he can fill up the cup. Marc Gasol is improving about as fast as his older brother did. Mike Conley is shockingly better than I thought he’d be when he was playing at Ohio State. Darell Arthur seems to be a great glue guy who you don’t have to run plays for but still finds a way to chip in 15 on any given night, and is filling in admirably for Zach Randolph nursing his tailbone. Their bench isn’t all that exciting, and may hold this team back, but just based off the starting five, they are pretty solid.

Yes, we get it, the World Series ratings are extremely low. So what if it means more people would rather watch a regular season matchup of either MIN/NYJ or PIT/NO. Does that influence me to watch those games over the WS? Not really, I still took in the fall classic, because I’m intrigued by the teams and storylines. I think this once again proves that the Eastcoast media bias has too strong of a hold on what were supposed to care about. Just because it’s non-Eastcoast teams we are lead to believe that we aren’t supposed to care about it. If you like baseball, why wouldn’t you be into the WS? I for one find the most important games of a sport that I watched for 7 months more intriguing than football games midway through the regular season… I think the problem with the ratings is more that far more people like football, its just a fact. If baseball had half of the football audience, and everyone didn’t hate listening to Joe Buck,  I’m sure they’d have higher ratings. If Lincecum vs. Lee doesn’t get you excited, then you probably aren’t a baseball fan.

I'm a dude that just hit 30 years old. Pretty much like everything that is funny, insightful, and has to do with the Warriors, A's, and Raiders. END_OF_DOCUMENT_TOKEN_TO_BE_REPLACED
This entry was posted on Monday, November 1st, 2010 at 3:40 pm and tagged with AFC West, Baseball, better than expected, big win, football, heisman watch, memphis grizzlies, NFL, oakland raiders, ratings, winning streak, World Series and posted in Sports. You can follow any responses to this entry through the RSS 2.0 feed.
« Saturday Wake Up Jam
San Francisco: World Champions »