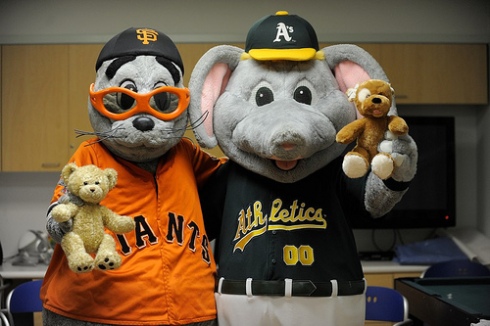 We sometimes neglect our teams in writing posts since we follow them so closely that we feel like everyone probably already knows what’s going on with them, in reality, that’s probably not true. Now that we have a Giants fan in the mix in By, I figured it would be fun to do an overview of our two favorite bay area teams from our homer perspectives. I’ll be writing up the A’s portion and By will be doing the Giants portion for this season.

Oakland A’s – Our starting pitchers have picked up where they left off last season, and by that I mean dominating the first six innings of their games, and only giving up two earned runs or less in all but one appearance. The new offensive guys (Dejesus, Willingham, and Matsui) in the heart of the order aren’t producing much, and unfortunately the other guys in the lineup are doing what they did last year, which is leaving runners in scoring position. They have had the lead at one point in every game this year, but can’t seem to keep it for too long in most cases. We still seem to have a heavy handicap in the home run department, but we seem to be getting more guys on base than last year, so there’s a little hope on the horizon. They’ve been close in every game late, because of that great starting pitching. If it weren’t for them thinking they were playing soccer to the tune of kicking 9 fielding errors, they could easily be .500 on the year. Somewhat concerned about this start.

San Francisco Giants – This is simple.  One, Lincecum, Sanchez, Cain, Zito & Mad Bum.  A solid bull pen, and the game’s real life version of Rick “Wild Thing” Vaughn to close it.  I’m not worried about a 3-4 start.  Perhaps I’m being a little generous when mentioning Zito in that list, but I can’t uninclude him when he’s rockin’ the new ‘stache.  Two, we have a group of loveable guys who all play hard together and get along with each other.  Yes, Aubrey Huff in the outfield scares me, but the young studs in Buster Posey and Brandon Belt in our every day lineup more than make up for it.  Do not sleep on Miguel Tejada, by the way.  And three, we are still the defending champs.  This season is (now) seven games in for the Giants.  I’m not worried about a 3-4 start.

Oakland A’s – Their bullpen is already injured like it’s mid-season. It was supposed to be a heavy strength for the team coming into the season, so far all we’ve been left with is blown leads. Balfour and Fuentes our big acquisitions in the pen this off-season both blew saves in their first tries as Athletics with Bailey on the DL. Their fielding was never a problem last year, but with 9 errors in only six games this year they are dead last in that category. Their last two games in Toronto that were errorless, and same with the day game in Minnesota today, so that has me feeling like it was just a little early season rust. Hopefully that’s the case. Maybe all the talk of needing to upgrade at third got to Kouz’s head as he’s tied for the team lead with three errors. Lastly the A’s have been terrible with runners in scoring position this season only logging three hits when that chance arises.

3)  We haven’t produced runs consistently, spoiling some good outings by our starting pitchers.  Add to that, our bull pen hasn’t looked as crisp as they did during last season’s historic playoff run, so I guess there’s some cause for concern there.

3a)  It would be nice to have Cody Ross back.

I'm a dude that just hit 30 years old. Pretty much like everything that is funny, insightful, and has to do with the Warriors, A's, and Raiders. END_OF_DOCUMENT_TOKEN_TO_BE_REPLACED
This entry was posted on Friday, April 8th, 2011 at 7:57 pm and tagged with Baseball, MLB, Oakland Athletics, Review, san francisco giants and posted in Sports. You can follow any responses to this entry through the RSS 2.0 feed.
« Spoof NBA Lockout Ads
Masters, Manny, and a Beat-down in Pittsburgh »

5 responses to “Elephants and Seals”