What Would Tebow Do?

I know this is a bit old, and my intentions was to get this post up during the end of the 2010 NFL Season, but things happened, and I delayed the post.  Seeing as to how I’ve had the longest episode of Writer’s Block in the history of my blogging existence, I figured why not just post my past thoughts in the mean time?  So here is WWTD Pt. 2, hope you enjoy!

Randy Moss
Randy Moss is no stranger to controversy, but it was his public dispute with a blue-collar kind of guy who owned a buffet restaurant that created a media frenzy, ultimately contributing to his being cut by the Vikings.  According to the owner, Moss stated his food wasn’t to the standards of what Moss fed his dogs.  It seems as if someone could use some God in his life.
What would Tebow do?

While Tim Tebow is not susceptible to disliking one’s cuisine, what he would have done was use God’s will to turn a negative into a positive.  He would tell the owner he was feeling charitable, then box up the spread and send it to a third world country to feed the poverty-stricken children.  When asked how he would be paying for it, he’d reply, “Straight God homie.”

Brett Favre
Brett Favre has acted like a little girl about his retirement for the past three or four years, so it’s fitting that he and his career won’t ride off into the sunset, because of a girl.  Obviously “sexting” can be inappropriate, especially in the alleged manner in which Favre was doing it, but who’s to say he wasn’t led on by his accuser?  I’m sure a Jenn Sterger reality show isn’t far off in the making.
What would Tebow do? 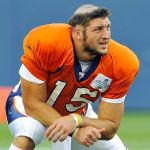 It’s difficult for any man to avoid temptation and sin, especially when your profession surrounds you with beautiful women who are eyeing your seven or eight figure salary.  But to preserve his purity and commitment to the Lord, Tim Tebow would go to extreme measures, including fixing himself up with a Friar doo.  What better way to detract women from you, than by becoming hideous and creepy?  Now excuse me, I have a Davinci painting to dispose of.

This entry was posted on Friday, March 25th, 2011 at 8:19 am and posted in Sports. You can follow any responses to this entry through the RSS 2.0 feed.
« The Government Needs to Move On….
Coach K’s Pity Party »

11 responses to “What Would Tebow Do?”