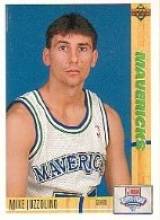 You may have seen this one coming. After Chappy brought up NBA Jam the other day, I can’t stop looking back fondly at all those dynamite duos from the original arcade game. Remember when everyone would fight over who got to be the Lakers, so they could run the floor with Vlade and James Worthy? If you were unlucky, you’d likely settle for the second best team, the Milwaukee Bucks with Brad Lohaus and Blue Edwards. The Seattle SuperSonics were pretty unstoppable, because what says fast break action more than Benoit Benjamin? Ultimately, you were always okay as long as you didn’t pick a team with one of those pint-size players like Tim Hardaway or Isiah Thomas. It was cool for Kings’ Spud Webb to be tiny, since he was, but can’t Mark Price at least look like a man and not a boy?

Speaking of men among boys, anyone who put a quarter into an NBA Jam machine earned themself a date with Mike Iuzzolino. Since the Mavs were arguably the worst team in basketball, the video game Mavs were no different. They were the first team you played, and Derek Harper must have pissed off some teammates since it looked like none of his digital cohorts wanted to play with him. Nonetheless, Mike Iuzzolino was happy to take on the challenge. Apparently Mike will take on any challenge. Check out this highlight reel I found. Not only can he excel on the basketball court while looking extremely mediocre, Iuzzolino also – unless I’m missing something in translation – has tons of skills in the editing room, converted an old run-down prison into a three star hotel, and runs a successful tire conglomerate that puts lots of names on their receipts….

Let's Go Oakland....clap, clap, clap clap clap END_OF_DOCUMENT_TOKEN_TO_BE_REPLACED
This entry was posted on Thursday, February 3rd, 2011 at 8:07 pm and tagged with mike iuzzolino, NBA Jam and posted in Sports, video games. You can follow any responses to this entry through the RSS 2.0 feed.
« The Death Of Free Sports
Doin Super Bowl Lines »

2 responses to “Some Mike Iuzzolino Highlights”