This football season sure has flow by. Maybe it’s because the Raiders were relevant for so long I kind of forgot what it meant to care about the regular season. I ended the year making good picks with three straight winning weeks, as soon as the playoffs started, I went down faster than a Charlie Sheen threesome culminating with last weeks 0-4 performance. What does this tell me about making picks in the playoffs, don’t listen to any of the hype. Pick the opposite of your instincts, and you’ll be okay. Maybe that’s not the best strategy, but I have to change it up since nothing I’ve done the first two weeks is working.

.500 in the playoffs, I’ll take it.  The bonus here is I successfully picked the biggest upsets in the playoffs thus far, Seattle over New Orleans and the Jets over the Pats, so I’m some what satisfied with my overall performance in terms of picking winners this post season.  Only problem is, I have no winnings to show for it.  Maybe I should stick to two spot parlays over four.  Well, there’s only two games this weekend …

Chappy picks Chicago (+3.5). I really don’t want to pick Chicago, and would much rather see Aaron Rodgers make his first Super Bowl appearance, but it’s opposite day with the picks, so I guess I’m rolling with Obama’s favorite team. In two games during the regular season the Bears held Rodgers to 27 total points. This looks like a different QB than the last time they played though as he tore through Philly and Atlanta, but I’m confident the Bears D can stifle him enough to keep the score close. The Bears are a much better defensive unit than those first two teams Rodgers faced. Even though the lowly Seahawks put up 24 points on the Beard D, that game wasn’t as close as it looked in the final score. I’m far from a Cutler fan, but his season has been pretty good, and whether I like to admit it or not, he is a franchise QB. He’s made the best from what he had, which isn’t much outside of Matt Forte on offense. He’s definitely prone to make some ill advised throws here and there, but overall Cutler has grown a lot since last year’s abysmal season. I can’t remember a home team that was the #2 seed, and won their division, and was still a dog. That point alone sold me on this pick.

I like the Packers defense and offense better than Chicago’s, but that doesn’t always win you games. I think a few turnovers, and some solid returns from Hester set the Bears up for a win. These divisional games are usually very close, so it’s impossible to not take the points.

By picks Green Bay (-3.5). Normally I’d be shocked to find that a team that barely made the playoffs (albeit through no fault of their own, 2010 Seattle Seahawks) would be the favorite on the road against a team who finished second in the conference.  But not if said team had Aaron Rodgers as their QB.  I was high on Atlanta all season, and despite the fact that they weren’t the Pittsburgh Steelers on defense, the Falcons still did enough to hold off opponents for wins.  But Aaron Rodgers absolutely destroyed them.  He’s been picking apart most of the defenses he’s seen for a minute now, and is easily the hottest QB heading into the conference championships.  Combine that with the opportunistic defense of Green Bay, and the Packers have a winning combination.  If “loosey goosey” Jay Cutler rears his ugly head at all this weekend, the Pack will get a few picks and send the Bears into hibernation.

Chappy picks NY Jets (+3.5). Should we start calling him the Sanchize again? He’s already graduated from my nickname earlier in the year the SanCheckdown. I may have fallen prey to the media surrounding Sanchez, because he never can do enough to get love from the writers, me being one of them. He has had a good year, but this weekend against the league’s best rush defense he is going to have to step up. I don’t see him going for over 300 yards or anything, but his ability to pick up third downs will be the difference in the game. We know the Jets will run whether they gain yards or not, so it’s going to be up to Sanchez to find ways to convert those third and longs. 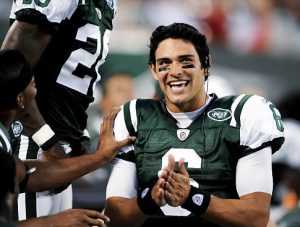 I think the Steelers will win, but since it’s opposite day I have to stick with the Jets. Plus, I don’t really like that everyone calls the Steelers Americas team. It’s better than Dallas being called Americas team, but nobody outside of the Saints last year should have that label, because is America really rooting for the Steelers? Laughable if you ask me…

By picks N.Y. Jets (+3.5). As much as I think Alex Smith could easily be Mark Sanchez if it were he riding the coat tails of that tremendous Jets’ defense, I must admit, that scoring drive to answer New England’s, culminating in a beautiful touchdown grab by Santonio Holmes was quite impressive.  Impressive considering what was at stake.  If they don’t score, I truly believe New England’s momentum carries them to a come back victory.  But Sanchez nipped that in the bud.  The Steelers are a wholenother monster.  Sanchez will not perform so eloquently against the best defense in the business.  But he won’t have to.  I think Sanchez has developed a comfort level in being the game manager/clutch timely passing QB.  His 4-1 playoff record would back that statement up.  As good as a defense is, you need someone who can make the plays when it counts on offense.  If Sanchez could be the equivalent to the 2000 Trent Dilfer, then by all means Jets fans, take it.  I think he’s almost there.  When everything’s said and done, I believe the Steelers are by far the better team.  But if I have to go with my gut instinct, I think the Jets pull this out.

I'm a dude that just hit 30 years old. Pretty much like everything that is funny, insightful, and has to do with the Warriors, A's, and Raiders. END_OF_DOCUMENT_TOKEN_TO_BE_REPLACED
This entry was posted on Saturday, January 22nd, 2011 at 12:55 pm and tagged with AFC, championship, football, lines, NFC, NFL, picks, predictions, preview, Spreads and posted in Sports. You can follow any responses to this entry through the RSS 2.0 feed.
« Seriously, What Is This Move Called?
USF, Gonzaga Pass On The Escalator »