Just some quick thoughts on the young NBA season …

Despite getting absolutely destroyed by Chicago tonight, my Golden State Warriors currently hold a 6-3 record going into Saturday’s game in Milwaukee.  Things to note:  Keith Smart appears to be an excellent coach, who seems to understand today’s players.  Steph Curry has not fallen into the Sophomore slump.  David Lee is the right acquisition for this team.  Dorrell Wright is the perfect acquisition for this team.  And finally, the team chemistry is at an all time high.  I love this squad.  All praise the “Smart” era!

If the Heat crowd consisted of this 24/7, I might change my tune.

Coming into the season, all the talk was about the Miami Heat, and rightfully so.  They assembled a baby “Dream Team”.  Well, they’re currently 5-4 (not as good as the Warriors) and show no signs of being capable of beating Boston.  But, the most shocking thing to me about Miami is, well, they’re boring to watch.  LeBron and Wade are a highlight reel waiting to happen but without a soundtrack.  What I mean by that is their crowd is weak.  LeBron’s posterizing dunks will never quite be the same without the Cleveland crowd behind him.  I’m sorry Miami, I’m sure there are some real Heat fans out there, but they’re currently not in the stands.

David Kahn is probably the worse President in basketball.  I take that back, that’s an understatement.  David Kahn is absolutely the worse president in basketball.  So it’s fitting he’s hired, and kept the worse coach in basketball in Kurt Rambis, employed.  Here’s an “NBA Coaching For Dummies” tip for you Rambis, play your best player.  I don’t know what Kevin Love’s done to Rambis behind closed doors, perhaps a Delonte/LeBron situation but involving his daughter, but whatever the case, Rambis can’t be limiting Love’s minutes due to “lack of defense”.  If that were the case, Michael Beasley should be riding the pine right next to him.  Of course, I wouldn’t be concerned about what’s going on in Minnesota, had I not drafted Kevin Love as a keeper in my fantasy league.

Could the Lakers be attempting to chase down history?  Some people, including myself thought the Heat would be challenging the 1995-1996 Chicago Bulls for ultimate team supremacy and bragging rights, by eclipsing Chicago’s 72 wins season.  Well we got the wrong team.  It’s the Lakers laying down the foundation towards team immortality.  Why didn’t I see the signs?  Phil’s last run.  Kobe’s competitive nature.  I’m sure the moment LeBron announced his plans to hit the W on South Beach, Kobe hit the gym.  Plus, Pau Gasol has emerged as the best player on this team, and in the league.  Yes I said it.  That title has belonged to him ever since the NBA Finals two seasons ago.  He was robbed of a Finals’ MVP trophy last season.  The Lakers are so good, and so deep, they can cut Andrew Bynum and be O.K.  Name another team that could do the same.

John Wall and Blake Griffin are fresh, new and exciting!  Like seeing Tony Hawk execute the 900 during the first X Games exciting!  At this point, I don’t see either the Wizards or the Clippers making a playoff push, but the race for Rookie of the Year will only continue to heat up!  When it’s all said and done, I believe John Wall will edge out Griffin due to the fact that he can do the feminine version of the “Dougie”.

We're about to make it rain this weekend!!

Woot woot! 4-1 last week! My best showing of the year as far as I can recall. Too bad I ran out of money on the tables in Vegas to throw bets down on Sunday. Oh well, life goes on. It’s amazing how different this year has been in that, I don’t really care about my fantasy teams or my bets nearly as much as years past. I guess that just goes to show you that when my team (Raiders) are doing well, nothing else matters to me in the football world. I kind of forgot what that felt like, and let me tell you, it’s a sweet feeling I was missing in life! I still like winning money, so I’m going to try to follow up a great week of picks with another one for back to back winners the first time this season!

Congrats to Chappy’s 4-1 last week!  As for me, 1-3-1 doesn’t quite have the same ring to it.  What sucks the most was that I was extremely confident I would finally top .500 this season with last week’s picks.  I guess the only good that came out of it was that my suggestion on taking the Jets to win in Detroit actually helped Chris out.  Anyway, it’s back to the drawing board for me.  Perhaps I need a trip to Vegas …

Chappy picks Baltimore (+1). It’s rare the NFL Network gets a game that’s worthy of watching. Fortunately for them they drew a great one this Thursday when two first place teams meet. Will the Ravens spit on the dirty bird? I think they might, and it’s going to take a lot of loogies to pull out a victory on the road. Neither team has injuries, so this should be a great game with all the starters out there. This is a battle for the future as Matt Ryan and Joe Flacco try to prove who is the better QB of that 2008 draft class. 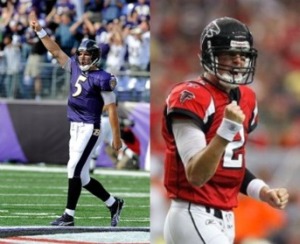 Atlanta is 4-0 at home, but three of those contest came down to the last minute. I don’t see this one being any different except that they will finally be on the losing side of things.

By picks Atlanta (-1): What a dream match up between two title contenders.  This could very well be the prequel to the Super Bowl this season.  I like Joe Flacco about as much as the next guy, but I’m a big believer of Matt Ryan and his upside.  This game is pretty much a straight bet, and so the deciding factor for me comes down to which team has more weapons.  With Michael Turner quietly having himself a great year, and with Roddy White not so quietly emerging as the league’s best receiver, I give the edge to the Falcons.  Besides, I can’t ride them all year long to jump ship now.

By picks Indianapolis (-7): I got it half right last week, I knew the Colts would fall in Philly, but I thought Philly would cover the spread.  Damn those odd makers, they’re really good.  Anyway, give Cincy credit last Monday, as they fought back valiantly to make it interesting against the Steelers.  But with Cincy on a short week, and with Peyton fuming from the loss, I predict the Colts make mince meat out of the Bengals in week ten.  Colts by 17.