What’s Next For Pacquiao the Politician?

Manny Paquiao IS boxing right now, and what does he get after he plaster’s (pun intended) Margarito’s face to his glove? Ridicule, that he’s ducking black fighters that fight with an American style. Okay, maybe it was only Bernard Hopkins that said that, but it seems like some agree with his comments, so I’ll assume that’s everyone. It’s funny that a guy who is 52-3 over his career, and owns eight belts that he moved up and down through different weight classes to achieve would be ducking anyone. What more do people want from him? The easy answer to that is seeing him fight Floyd Mayweather. While it doesn’t sound likely it will happen anytime soon, I do think it will happen, unless Floyd keeps ducking it. There’s a couple reasons why I feel like it will happen, and I’ll build my theory through this post, so I can prove I was right when it does go down as the biggest grossing fight ever.

It’s been reported that Manny has outdone Mike Tyson for PPV sales, which was somewhat of a surprising stat to me, but not shocking. I thought Tyson fought more intriguing opponents than Manny, but it seems that people are paying to see Manny just as much, and I don’t blame them, because I love watching him fight. With a growing crowd latching onto every Manny fight, don’t you think Mayweather will notice that he’s not the top grossing fighter without Manny? I think Mayweather will eventually, and since Manny did accept all the terms that Mayweather’s camp requested during the last stale mate, there’s no questioning that Manny wants the fight to happen. Mayweather might hate Bob Arum, but really, who doesn’t? Hopefully he can realize that it’s bigger than Arum, it’s about finding out who is the best, and making a boat load of money. 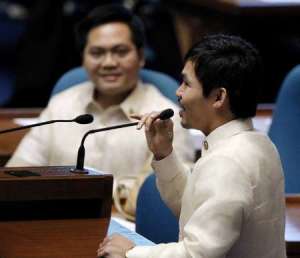 Now that Manny says he only has three fights/three years left in him (which is understandable), because you don’t want to be in a political office and have your brain turning to mush while making decisions that affect a lot of your fellow countrymen. I honestly have no idea who he will pick for his next opponent, but can guarantee he won’t be fighting Mayweather with the first of his supposed final three fights. My theory is that they don’t fight until Manny’s last fight of his career. Just imagine the kind of money that would pull in. It realistically could be the top grossing fight ever! Another scenario I’ve been kicking around is Manny doesn’t fight Mayweather in his next three fights, and then retires. A couple of months later he comes out of retirement just to fight Mayweather for something to the tune of $200-$300M. How could you pass that up? Boxing is a corrupt sport, and its only fitting Manny is a politician. Politician’s make calculated decisions, and this theory feels like a great decision to me.