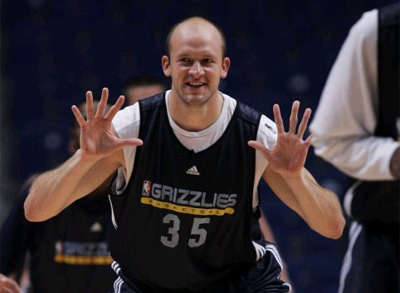 In the wake of Anthony Tolliver and “The Decision: Part Deux,” Chappy, By, and I got to thinking about former Warriors who put up meaningless numbers on terrible teams, but somehow fooled other teams into offering them ridiculous contracts. Tolliver is the perfect example. A D-League call-up who received significant minutes because no one else wanted to play. I know, I know, they were injured, but after the recent interview with Andris Biedrins, I’m starting to question the entire team’s dedication. But back to the subject, here’s a list of players who’ve benefited from a little time spent in the East Bay. I call it the “Cardinal List,” named after former Warrior Brian Cardinal, who had a stellar season in Oakland, and then signed a fairly large contract with the Memphis Grizzlies, which might even still be going. I’ll check it out when I get to him, but I’m willing to bet he produced more in his one season in Golden State than he did during his entire contract in Memphis.

Gilbert Arenas – Washington: Okay, this one’s a little different because Arenas turned into a legitimate star. But, he played two seasons in Oakland for a TOTAL of $844,ooo, and then proceeded to make about $82 million over 6 years in DC. He’s a little different since he’s a bonafide star, but a prime example of a player getting some shine on the Orena floor en route to a substantial payday. While the Wizards would probably argue that contract was a decent investment, the one they gave him after that may be one they regret.

Earl Boykins – Denver: Boykins didn’t exactly get his start in Oakland, but he certainly made his name there. While his numbers weren’t overwhelming – he did have 7 games of 20+ points though – he proved he belonged in the league. He went from making $528,000 with the Warriors to $2.5 million in Denver the next year.

Brian Cardinal – Memphis: Ah, the man the list was named after. Cardinal spent his first three seasons in Detroit and Washington, where he totaled 52 points. The Warriors, however, let him into 76 games, only to watch him average 9.6 ppg. He quickly became a fan favorite, but even the fans knew he wasn’t worth 4 yrs, $20+ million. Fortunately, Warriors management knew this too, and they let Cardinal go to Memphis. I was really hoping to see that he’d scored less in his 4 seasons in Memphis than that one in Golden State, but after tallying the numbers, he managed to rack up 897 points in Memphis vs. 733 in one season with the W’s. Pretty close.

Anthony Morrow – New Jersey: Where were you when undrafted rookie Anthony Morrow scored 37 points against the Clippers? Chappy and I were courtside at Staples Center, with zero idea that was going to happen. We were busy wondering if these free tickets were even going to be at will call, let alone be on the floor five rows in front of Mitch Richmond. But 37 points and 11 rebounds later, we were obviously on the Morrow bandwagon. I’m still a big fan, but Morrow is still just an average player. The Nets didn’t think so though, as they offered him four times his current salary, going from $736,000 to $4,000,000 this season.

CJ Watson – Chicago: I guess when you have Derrick Rose, you don’t really need the world’s greatest backup point guard. But, to pay CJ Watson well over three times what he was making last year, it seems like you could find a better value. After all, the Warriors found Watson, like many other players, in the D-League, so surely the Bulls could’ve found a similar player for a fraction of the price.

Anthony Tolliver – Minnesota: The guy who inspired this list. Yes, he did have a 34 point game last season, not coincidentally in Minnesota. But for a D-league call up who basically got minutes by default, I have no problem watching him walk up to the Twin Cities to the tune of $2.4 million per. The Warriors will probably find four guys next year for that price. And you know what? Those four guys will probably go on to sign inflated contracts elsewhere when their time is up.