It’s (Almost) Official: Tyreke Evans to be Named NBA Rookie of the Year 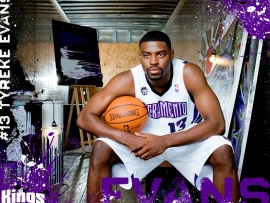 It may not be a secret, but chances are you heard it here first. Not that it’s tremendously unpredictable, but Tyreke Evans will be presented with the NBA Rookie of the Year trophy on Thursday. Today, the Sacramento Kings issued a press release announcing a “Major NBA Award Presentation” tomorrow. Unless Carl Landry is winning the MVP, one can only guess what this press conference entails. Unfortunately, this writer will be unable to attend the press conference due to other work obligations, but this announcement comes as little surprise to anyone on this panel. Evans became just the fourth player in NBA history to average more than 20 points, 5 rebounds, and 5 assists in his rookie season, joining the likes of Oscar Robertson, Michael Jordan, and Lebron James. It is truly an honor well-deserved. Congratulations Tyreke on a great rookie campaign.

Let's Go Oakland....clap, clap, clap clap clap END_OF_DOCUMENT_TOKEN_TO_BE_REPLACED
This entry was posted on Wednesday, April 28th, 2010 at 6:30 pm and tagged with Awards, basketball, NBA, rookie of the year, sacramento kings, tyreke evans and posted in Sports. You can follow any responses to this entry through the RSS 2.0 feed.
« Former Warriors Owner Franklin Mieuli Dies
WiffleBall California »

3 responses to “It’s (Almost) Official: Tyreke Evans to be Named NBA Rookie of the Year”