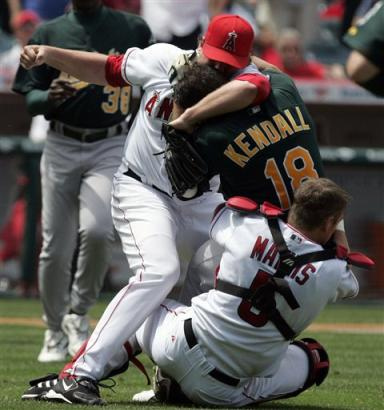 I don't like the Yankees, the Sox's, or big John Lackey, but I'm fully rooting for Lackey to throw some punches in one of their heated divisional games!

The Red Sox picked up John Lackey Monday, which was a solid move. I really like waving goodbye to Lackey from the AL West that is, he seemed to dominate the A’s every time he took the mound. Boston also made one other surprising signing as well. No, not Jason Bay. Matt Holliday?!? Nope, it looks like they are picking up Mike Cameron. Really!?! Interesting move Theo… I guess it’s a defensive upgrade getting a 3-time Gold Glover. Cameron has some power, and he is cheaper than the two mentioned guys. We’ll see how it pans out. I guess he could be a Johnny Damon type guy for them who has been known to be a good mentor and clubhouse guy. I just don’t see how it helps them compete with the Yankees, but oh well, I don’t really like them anyways. Another move that I saw, was the Red Sox offered Chapman a contract for $15.5 million! Ladies and gentlemen strap in for the next relevant Chapman! 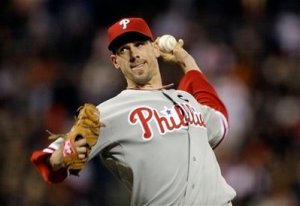 The other shocking moves made Monday was the trade that sends Roy Halladay to the Phillies, and Cliff Lee is going to Seattle. I don’t really understand why they wanted to give up prospects, when they could just turn around and sign Lee keeping the prized youth, but if they sign Halladay to a long extension it might be worth it. I could really care less about Halladay landing in Philly, the main reason stems from me not really caring about the NL all that much. I’m just worried the A’s will now have to face Lee now five times a year. In the end, I’m really curious to see how Phillies top prospects pan out, they’ve had a good run of home grown talent over the last few years, so I’m sure whatever they gave up to make Toronto happy, must have been worth it!

In A’s news, we let go of JacKKK Cust, and inconsistent, wrongfully named, Santiago Casilla. I see this as an addition by subtraction. Our defense just improved by not having to ever put Cust in the field again. He makes a little leaguer trying to catch a ball during the home run derby look like a all-star out there. He also clogs up the bases with his slow station to station movements, and kept speedy guys from moving around the bases at times. This team is moving into a speed era it appears, and Cust doesn’t suit that. All in all, it’s been a crazy day for the MLB off-season!

I'm a dude that just hit 30 years old. Pretty much like everything that is funny, insightful, and has to do with the Warriors, A's, and Raiders. END_OF_DOCUMENT_TOKEN_TO_BE_REPLACED
This entry was posted on Tuesday, December 15th, 2009 at 12:44 am and tagged with Aroldis Chapman, bad fielding, Boston Red Sox, Cliff Lee, deal, errors, Jack Cust, John Lackey, Mike Cameron, Oakland Athletics, Philadelphia Phillies, released, Roy Halladay, Seattle Mariners, signings, trade and posted in Sports. You can follow any responses to this entry through the RSS 2.0 feed.
« The Race Draft Revisited
5 Things That Need To Happen In Sports »