I’m far from a college football expert, or could really even tell you much about many of the teams, but I am pretty pumped to see the obvious Bama and Gators match up, and one of my all time favorite rivalries the Civil War Oregon vs. Oregon State! MCeezy wrote about how rivalry week is somewhat deceiving, but these two games are about as heated as rivalries can get! Hopefully they will play out that way! Same with my NFL picks the home teams are in bold.

I don’t think the Beavers will win this game, but Moevao has said that they are looking for revenge from last years upset. I didn’t feel it was a big upset last year, but what do I know! I feel they will pull out all the tricks they have in the playbook to keep this one close, and hopefully it ends up like 2007’s double OT battle. I understand that the Ducks are the more talented team, but in a rivalry anything can happen. Also besides the Beavers having to contain Lamichael James and Jeremiah Masoli they should see a small dose of Legarrette Blount in his first game back from the suspension. He should give them that big back to pound the football on the ground, which they haven’t had most of this season. MCeezy predicted he’d be back for their most important game, and it looks like he was right! I can’t figure out why this line is so high since the Beavers ARE at home, and ARE a good team! 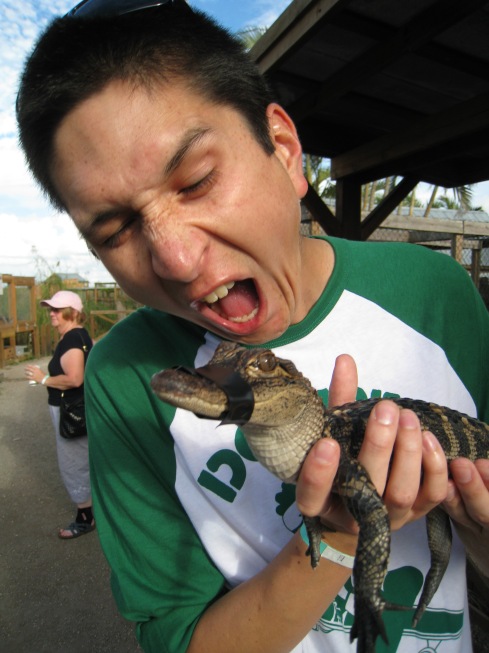 Me trying to curse the Gators by chomping on one!

I guess I’m writing about this game because I was in Florida last week, and it seems like it was all I really heard about for most of the week! After hearing the hype over there I’ve decided to pick my second straight underdog! I think that in college football the home field makes much more of a difference than it does in the pros. I’m not confident that Bama can actually pull this one out, but since they are the #2 team in the country they deserve to be at least within a FG on the spread at home! Florida and their 22 straight wins will probably win this game, but I like many others love to see an upset. I don’t dislike Tebow especially since he has proven that he is an amazing leader, but i don’t have quite the same type of love as Sportsguyby has for him! Losing Dunlap to the DUI, should make it a little easier for Bama to move the ball, and should give them a little more time to throw. I see this one ending closer than last years SEC title game!

I'm a dude that just hit 30 years old. Pretty much like everything that is funny, insightful, and has to do with the Warriors, A's, and Raiders. END_OF_DOCUMENT_TOKEN_TO_BE_REPLACED
This entry was posted on Wednesday, December 2nd, 2009 at 1:30 pm and tagged with alabama, Beavers, betting, college football, Crimson Tide, Ducks, DUI, Dunlap, florida, Gators, Lamichael James, legarrette blount, lines, National Championship, NCAA, oregon, oregon state, preview, Rose Bowl bid, SEC, Spreads, Tim Tebow and posted in Sports. You can follow any responses to this entry through the RSS 2.0 feed.
« NFL MVP… Brees or Manning? (…or Favre, or Johnson, or Peterson?)
NBA Early Season MVP Rankings »