Optimism For Athletics Fans, Once Again: A Rebuilding Process in Review 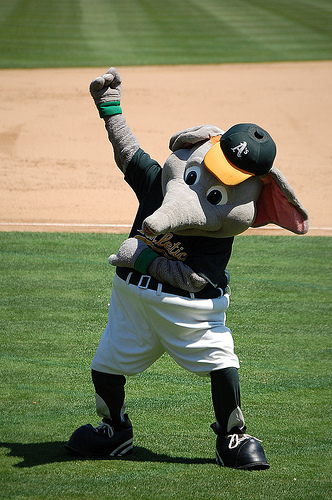 The A’s had their fans hopes sky high going into this season after making many moves and signings to acquire talent, instead of their normal MO of trading away talent. One thing led to another, and we found that the guys we signed either weren’t that good in an A’s uniform, or were just plain old. This season has been a disappointment to say the least especially with some of the experts picking them to win the AL West at the beginning of the year. Those dreams were quickly dashed as we saw Matt Holliday consistently getting fooled by pitches, and taking the crown for most fly ball outs since Eric Chavez was healthy and playing. Once his trade to the Cardinals went through Oakland once again had hope for the future. 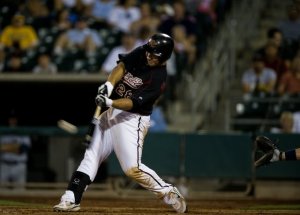 At the time of the trade all A’s fans wanted was a bag of peanuts for Holliday, but instead we got what looks like a great hitter in the near future with Brett Wallace, and a possible good end of the rotation pitcher in Mortensen.

I’ll be honest, I haven’t been paying that much attention to them since they dipped below the 20 games out of first. Alas, they have been playing very good as of late, which has inspired me to pay attention to them again. Maybe it’s because the games don’t matter, or maybe it’s because they have finally adopted a new style of play since their most recent rebuilding began. Since being swept by Seattle on August 26th, they’ve won or tied every series since, going 16-6, and are currently on a seven game win streak. Once again, A’s fans will be able to go into the off-season hoping that a fresh start will rid us of our recent losing ways.

The A’s main failings over the past couple season’s have all pointed to their incompetence on offense, and since getting rid of Holliday, Giambi, and Cabrera they’ve surprisingly done much better in that department. Post All-Star break, the A’s have led the league in stolen bases, doubles, and are third in runs scored. For a team that never used to steals bases, and isn’t known for manufacturing runs, it’s refreshing to see them make a change for what suits their players. The always referenced “Moneyball” will finally be an afterthought, as they seem to be turning to a new page. I haven’t read anywhere that they’ve had a change in philosophy, but it’s pretty obvious if you ever pay attention to them. Even Rajai Davis, a guy I never thought I’d like, is tearing it up. He stole his 40th bag of the season last night against Cleveland, and is the first big threat on the base-paths since Rickey Henderson was around. Rex Hudler, the Angels announcer, whom I completely despise, actually made a good point about the A’s and how they have adapted to so called “Angel way” of manufacturing runs. He likes how they are putting pressure on opposing defenses to worry about runners taking off at any given moment, which opens holes in the infield for more of those dribblers to get through. In a post steroid era the A’s can’t rely on power as much as they once did as we all know it was rampant in the Bay Area. So the shift to stealing bases and manufacturing runs has looked like the a good change in their philosophy, and is starting to pay dividends in the win column late in the season. 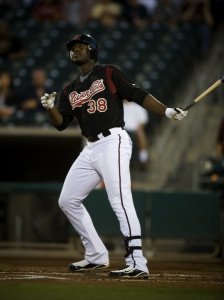 Chris Carter hits his fourth home run of the playoffs and is tied for most by a Rivercat in one series.

The greatest part about these late season stats is the fact that this isn’t even the reason I’m optimistic for next season. I’m excited about the guys going to be in our offense of the future. Sure guys like Kurt Suzuki are going to be mainstays in the lineup for awhile, but since everybody digs the long ball, A’s fans should be very excited about the two power hitters coming to Oakland sooner rather than later. 3rd baseman, Brett Wallace (#2 in Baseball Prospectus) and 1st baseman, Chris Carter (#4 in Baseball Prospectus) are the new reasons there is optimism in Oakland. They’ve already contributed to the Sacramento Rivercats (AAA) team during their playoff run for a PCL championship. Carter had three home runs in one game since being called up from AA about a month ago, and he is the closest to Ryan Howard type hitter the A’s have in their farm system.  Many point to Carlos Gonzalez as the biggest position player gained in the Dan Haren deal, but Chris Carter has the potential to have much more power than C-Gon. It also looks as though we kept the best pitcher from the Haren deal as well in Brett Anderson, who has had a rocky season, but has shown that he has ace type stuff. Brett Wallace should be on the other corner for the A’s infield solidifying a position that’s been a problem since Chavez went on the DL, about three seasons ago. Personally Wallace reminds me of Troy Glaus, and if we got that I’d be pretty happy. If the A’s can continue to steal bases and hit doubles the way they have been at the end of this season, and add the power of Wallace and Carter to the lineup they will undoubtedly have a chance to challenge the Angels for years to come. 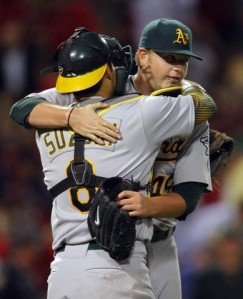 Rookie, Brett Anderson, has won two straight starts for the first time in his career.

Their pitching has been shaky at times this year, and may continue to stay that way as their under 25 year old rotation learns the ropes. Between Brett Anderson, Trevor Cahill, Vin Mazzaro, Gio Gonzalez, and maybe Justin Duchscherer (if he snaps out of his depressed mental state) we should have a solid rotation come next season. The young guys have taken their lumps this season, but they have also shown that they can shut teams and shown glimmers of domination. This year should have taught them the ropes as they find out what types of adjustments they need to make going into the off-season to prevent those crooked numbers from going up on the score board. Michael Inoa is a long way from being called up, but he’s another young guy I will be keeping my eye on, especially since we gave him a Strausberg like contract for a 16-year-old, which I still feel is kind of ridiculous. All in all I couldn’t ask for much more from our management on a tight budget. You just have to hope it all pans out!

I'm a dude that just hit 30 years old. Pretty much like everything that is funny, insightful, and has to do with the Warriors, A's, and Raiders. END_OF_DOCUMENT_TOKEN_TO_BE_REPLACED
This entry was posted on Sunday, September 20th, 2009 at 10:46 am and tagged with A's, AAA, Baseball, bases, billy beane, brett anderson, brett wallace, Carlos Gonzalez, chris carter, farm system, future, Gio Gonzalez, hitting, Kurt Suzuki, MLB, moneyball, Oakland Athletics, PCL Championship, philosophy, pitching, rajai davis, rebuilding, record, Sacramento Rivercats, stars, steal, trades, trevor cahill, winning and posted in Sports. You can follow any responses to this entry through the RSS 2.0 feed.
« NFL Hall of Fame Nominees are Out!!
Fantasy Baseball Awards: A Season to Remember or A Season to Forget »

14 responses to “Optimism For Athletics Fans, Once Again: A Rebuilding Process in Review”