The Raiders Outlook May be Bleak, but there’s Always a Silver Lining Before the Season Starts 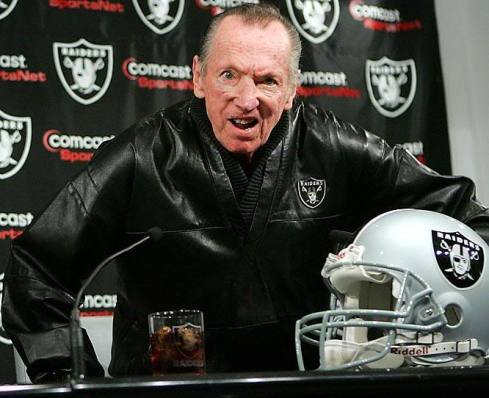 With Raiders Camp concluding on the 27th, I thought I’d take a look at our chances this season. I usually try to talk myself into believing that we will do good, and keep a positive attitude. This year, in all honesty an 8-8 season would feel like we made the playoffs. I’m not saying we’ll win that many, but I hope that we play good enough to at least cover the Vegas lines! 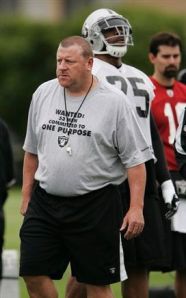 This off-season has been highlighted by Cable’s haymaker, but I’d say that last season’s Jevon Walker saga was much more dysfunctional. At least this season, it was football related. Plus, I really like that he did it. It makes me feel like he really cares. Whatever happens, I’m glad we have a coach that gets fired up enough to sock someone. If I was a player, he’d have my respect instantly. Anyways, if we’re going to win a significant amount of games this season it all falls on Jemarcus and his ability to lead this offense.

Entering his third season, he really needs to show the team something or their contingency plan (Garcia) will kick into effect. One thing about Russell, is he’s good at not turning it over, but on the same notion he doesn’t throw many TD passes and completes only %53 of his passes. I’m not a big fan of the pre-season telling you much since both teams are working out the kinks on both sides of the ball. I did catch some of the Raiders vs. Niners game, and was surprised to see Russell play pretty well with the exception of one wild over throw. He looked more comfortable than I’ve ever seen him. I’m not saying he won’t make bad decisions when the season starts, but at least he looks more comfortable/calm on the field.

As for their receivers, it’s definitely not completely figured out. I’ve read that #7 pick Darius Heywood-Bey (DHB), has seemed to be getting into a rhythm, and has made a memorable catch in mini camps. 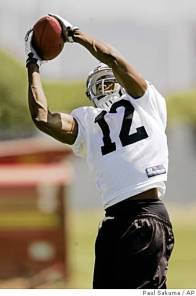 Jevon Walker made his first appearance at yesterday’s practice since last November after repairing his knee. He’s probably going to disappear more often than not whether he’s injured or on the field. Chaz Schillins, is not a # 1 receiver. Tight End Zach Miller, Russell’s favorite target last season, should be seeing just as much action. I just hope he’s not leading the team in receiving yards again, because we really need to get our receivers involved. If DHB is the highest rated receiver on the Raiders in Madden 2010 with an 81, then it’s definitely an area that needs a lot of improvement.

Our running game has been the one strong part of our offense for the past couple years, but we need some passing too. Having a clog in the backfield with Fargas, Mcfadden, and Bush, might be one to many backs. Not that they won’t be a great combo to put out there to force teams to stop,  but why wouldn’t you try to shop Fargas and Bush around?

They could address a number of needs and still have a two headed monster that teams covet in the backfield.  They don’t even need to go for a receiver that I stated they need so desperately. They could upgrade the offensive or defensive line. In this scenario, I’d much rather see Fargas go as he runs into his own linemen more than tacklers, but if it takes Bush to make a drastic improvement in any of the above mentioned areas, I’m all for it. I’m not saying that Mr. Davis would make a sensible move such as this one, but we can hope. I’m ready for the Chargers on the Monday edition of season openers!

I'm a dude that just hit 30 years old. Pretty much like everything that is funny, insightful, and has to do with the Warriors, A's, and Raiders. END_OF_DOCUMENT_TOKEN_TO_BE_REPLACED
This entry was posted on Wednesday, August 26th, 2009 at 9:49 pm and tagged with Al Davis, Darren Mcfadden, DHB, football, Jemarcus Russell, Jevon Walker, Justin Fargas, Michael Bush, NFL, oakland raiders, preview, Tom Cable and posted in Sports. You can follow any responses to this entry through the RSS 2.0 feed.
« Chris Carter Has Arrived!
A’s/Giants Minor League Tidbits »

3 responses to “The Raiders Outlook May be Bleak, but there’s Always a Silver Lining Before the Season Starts”