You may remember back in my first edition of Pebble Beach Stories, I wrote how much I despise the Fijian Bastard, Vijay Singh. Today I saw that Vijay missing the cut at the Byron Nelson Championship last Friday dropped him from the 51st ranked player to the 59th ranked player. That’s not all that exciting in itself, but it has forced him to play in a 36-hole playoff to try and qualify for the US Open at Pebble Beach. It could be the first time he has missed the US Open since 1994, and I hope he chokes in the qualifier so this does in fact happen. Not just to see him struggle, but so he’s not at Pebble creating hell for my former co-workers on the driving range! The part that I find most entertaining is Tony Romo could actually be in the US Open and Vijay could be a spectator. Couldn’t have drawn this up any better myself!

It’s been all over the newswires the last couple days that Phil Mikelson could be the #1 ranked player with a win at the Colonial this weekend. He would only be only the third player since 1998 to be ranked number 1, that isn’t named Tiger (David Duval and Vijay are the only other two to hold the #1 spot). If Phil doesn’t do very well, he will most likely still be #2, but if Lee Westwood, currently #3 pulls out a victory, he could conceivable jump Phil in the rankings. Tiger is supposed to play again next weekend, but no matter who ends up being in first come June it could set up to be a great storyline for the US Open. Despite it being a great major tournament, adding in the question of who will be the #1 golfer adds that much more drama. A non-US Open related story, Tiger might not be invited to the Ryder Cup according to captain Corey Pavin. I’m not buying it, but he is the 11th ranked American this year, so there’s a chance, but I’d say that’s a slim one since golf will want him to be in there for the ratings if he’s healthy. I think Pavin is just trying to pull in a little attention while he can! 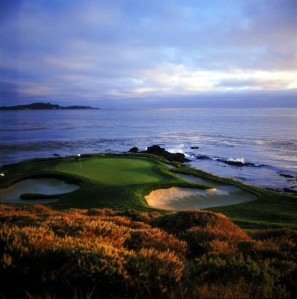 With the dawn of a new PGA season upon us, I feel it’s only right to get my golf posts started up again. I’ve been putting this off for awhile, but I feel like I owed it to some people to put up some good stories from when I worked at Pebble Beach Golf Links. I was working there for two years and some change during college, and had a few interesting experiences along the way. I will try to continue this series for as many stories as I randomly remember! The main reason for this inspired series coming up now, is that, the 25th AT&T National Pro AM is fast approaching (Feb. 10-14), and the US Open is also being held at Pebble this year for the first time since Tiger dominated it in 2000. I’m pretty excited for the Open, so hopefully some of these posts will get you excited as well…

Every year the AT&T National Pro-Am is held at Pebble Beach in early to mid February the resort gears up for their biggest tournament of the year, which is a good thing for the employees. They always hire on so much extra help/volunteers for the tourney, we really don’t do anything during the day except drive golf carts around, watch the tourney, and help the players where we can, like shuttling them around. The inspiration for this first post is people hitting golf balls at people. 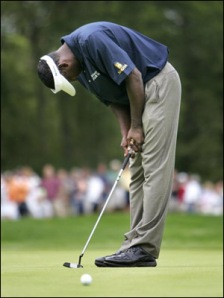 On a Wednesday before the tournament started in 2005, we were closing down the range, and Vijay was the last guy there. It was getting dark, and he was the only guy out there for the past half hour. I guess this isn’t an uncommon thing as Vijay usually practices longer than a lot of guys, so my boss says. My coworker told him he needed to wrap it up, because we needed to clean up and get out of there. He told him to finish off the balls he had, and that was it. Vijay finished the balls in his trey and sent his caddy to get more balls. His caddy took them from one of the barrels that we just picked up off the range. My boss went over to him, and said that he had to go because we were closed, but let him hit the ones that he had just put on his trey. After he had hit those ones, he still didn’t leave. Instead, he pulled out his own balls and started firing them from the range tees over to where me and another employee were cleaning up the chipping green area. He almost hit the gardener that was about to cut the lawn. Biggest dick move I’ve ever seen from a professional golfer. I could see if he wanted to practice deep into Saturday night, if he was in the hunt for a win, but this Wednesday before the tourney even started. He played the tough guy I’m a star card, and refused to stop practicing. This is the main reason I will never root for him. He’s a selfish bastard that thinks he can do whatever he wants. Anyways, the gardener got in his face, and Vijay finally left the range an hour after everybody else that was practicing. The best part was that he didn’t come close to winning the tourney, and he didn’t even make the cut! Karma is a bitch! 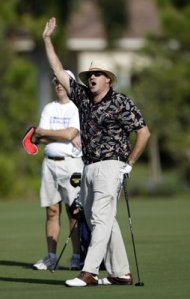 Chris Berman or “the Swami” gets invited to the pro am each year, and is always super excited. He’s a great guy to talk to, full of energy non-surprisingly to many. Anyways, one tourney he was right on the cut line, and was waiting in the clubhouse to see if he made it. When the third to last group bogeyed 18 he jumped up and down hugged a few people in the pro shop saying “I made it!” over and over. It was like he won the tournament or something, but I guess being a broadcaster you have to feel like you belong to the athletes your always talking about. Anyways this story of the Swami takes place on the 14th hole, and quite possibly the hardest hole on the course (easily the hardest par 5). It’s a long dog leg right, that is uphill after the tee shot, and takes most at least four to get on the green. I was standing with a co-worker watching a few groups go by, and Berman was one of them. His tee shot was a shank, and heading for us/the crowd through the dog leg. The ball came within about five feet of us hit the cart path and went directly into some guy’s nuts like it had a heat seeking lock on them. Me and my friend were both wearing our work clothes, but couldn’t help from cracking up. I’ve always found it amazing that people don’t pay attention during this tourney or any tourney there are amateurs at. Don’t they know that amateur means not that good? Shanks are going to happen on the regular! By the time Berman got to his ball, it’s pretty doubtful that he even knew what happened, except for the fact that his ball was saved from going to the 8th fairway.

Look for Part II coming soon, on the baseball players!