We’ve Got To Put Up With This Now?

Just when it looked like the USF Dons were making their move back into the WCC’s elite, the elite is getting eliter. Gonzaga looked like they had all but fallen from the perch they’ve owned for a decade now, and I even proclaimed that they had – prematurely. St. Mary’s took a big step back this year when they failed to make the NCAA tournament, and subsequently got ousted in the first round of the NIT by Kent State. Though USF has been making strong run to the Elite 8 of the prestigious CIT, surprisingly my attention was squarely focused on the Gonzaga-BYU game yesterday in Denver.

After Gonzaga turned their season around and won the WCC tournament, they dominated St. John’s and looked poised to make another cinderella run in the tournament. But then they ran into BYU. After a pretty close first half, the Cougars steamrolled the Zags and disposed of them 89-67. The scary part is, BYU is coming to the West Coast Conference next season. Gonzaga has ruled the conference for the last 11 years, and BYU has just squashed them like they were nothing. Part of me finds relief in the fact that Jimmer Fredette won’t be around next year, but another part of me knows that Brigham Young is a perennial 20-win team with 8 NCAA Tournament appearances in the last 10 or 11 years. Despite CIT wins over Idaho and Hawaii, the Dons suddenly move down to the fourth best team in the WCC next season. It’s gonna be lot harder to get back into the NCAA tourney for the first time since 98…..

USF, Gonzaga Pass On The Escalator

One’s going up, while the other’s going down. I’ll try not to be my usual pessimistic self and talk about how the Gonzaga hoops dynasty is ending before our eyes. For one thing, I just that very thing last weekend with the Patriots. Also, Yahoo’s got that very post on their front page. I will mention that Gonzaga has won the West Coast Conference every year since I first stepped foot on the USF campus. The last time they didn’t win the conference, I didn’t even know the WCC existed. From Casey Calvary to Blake Stepp, Dan Dickau to Adam Morrison, Ronny Turiaf to Jeremy Pargo, the Zags haven’t been anything less than the best for the last ten years. They even became the poster child for mid-major Cinderellas for the entire decade. They were essentially the Boise State of basketball. This year, they entered conference play with an impressive, though not breathtaking, 13-5 record. Gonzaga is know for its “play anyone, anywhere” mentality, so it wasn’t much cause for concern since their losses came against San Diego State, Kansas State, Illinois, Washington State, and Notre Dame. However, this weekend was pretty much the beginning of the end for the Zags. They lost back to back games in the Bay Area at Santa Clara Thursday night, and then Saturday night on the Hilltop in San Francisco.

here’s a highlight reel that would have you believe USF won 96-3…..

Enough about Gonzaga, the real news here is the apparent resurgence of the University of San Francisco’s basketball program. With this weekend’s 96-91 overtime win over the Zags, USF has moved into sole possession of 2nd place in the WCC, donning a 4-1 record for the first time since 1982. You won’t see them in the Top 25 rankings anytime soon though. They were 6-9 at the conclusion of their nonconference schedule. Besides hanging tough against undefeated San Diego State in Las Vegas (62-56), the Dons had looked pretty listless in losses to San Jose State, Montana State, Loyola-Illinois, CSU Bakersfield, Louisville, Washington, IUPUI, and Colorado State. It did make for the 11th toughest schedule in the nation, and needless to say that ranking  is going up now that WCC play is underway. With a win Thursday night in Los Angeles against Loyola Marymount, and a Gonzaga win over St. Mary’s in Spokane, the Dons could find themselves sitting in first place, tied with the rival Gaels from across the Bay. Regardless of whether or not that happens, I’m definitely not predicting a conference championship for USF here. What I’m saying is they look well on their way to challenging for it again. Not only is their only one senior on the roster – center Moustapha Diarra is solid, but hardly a key cog – arguably their three best players are two sophomores and a freshman.

It’s always fun to see a hated dynasty fall, but down the road, it’s also fun to see them come back. It was great watching the Lakers, Cowboys, or Yankees fall from the top spot, but sports are just that much more fun when teams like that are good. It’s clear most people have long-forgotten the 1950s when Bill Russell and KC Jones were leading USF to back to back NCAA Championships. College basketball sure would be a lot more fun for me if they were good again. Something tells me we’ve still got a St. Mary’s dynasty to endure first though. 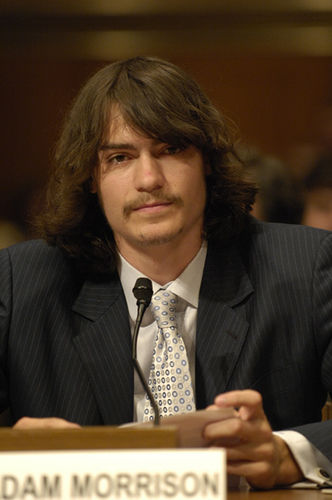 I am not an Adam Morrison hater. Nor am I a Gonzaga fan. These are the two things you need to know first, otherwise you’d assume the opposite. The title might also be a bit misleading, as it may suggest this is gonna be a kick-Adam-Morrison-while-he’s-down party. I don’t like Adam Morrison, but I don’t not like him. I never rooted for him, but I also never really rooted against him. Well, no more than I would any player playing against my team. See, my Adam Morrison story goes back further than most’s. I’ve more or less watched his career every step of the way. Although of late, like with any sitcom that’s run its course , there’s just not much new going on. Much like Head of the Class, you don’t really see a lot of him on TV anymore. But when you think about it, that’s what RFPs really are. Players and shows you used to like watching as a kid, but now they’re nothing more than a once-every-9-years blip on your life’s radar. It’s not a flattering distinction, but it’s not the worst either. I’ll be damned if I didn’t respect each and every one of those guys I’ve featured in an RFP of the Day.

The pilot episode of my Adam Morrison saga was in the beginning of 2004. I was playing (not ball) at USF and he was a freshman at Gonzaga. The Zags were continuing their rise to the upper echelon of college basketball, and the Dons were continuing their decline to the outer realms of relevance. Gonzaga was making their annual visit to the Hilltop in San Francisco, led by Ronny Turiaf, Blake Stepp, and Corey Violette. They also had a new freshman on the team, who came pretty highly touted. In front of a sellout crowd at War Memorial Gym, the game went down to the final possession. With the game tied at 63, the Dons had an opportunity at the last shot. When their game winning attempt rimmed off, JP Batista grabbed the rebound, outletted to the freshman with the buzz cut, and Adam Morrison pulled up just in front of the half court line and buried a 40 footer at the horn that silenced the crowd and sent the Zags home with a 66-63 win. (Editor’s Note: I have since learned that none of this ever happened. I combed the annals of the WCC  and could not find a box score to validate this story. But I have believed it to be truth for the last 6 years, so I’m leaving it. -mc)

The following season – or so I thought, my memory’s credibility is completely shot at this point – Gonzaga returned to the City, this time with Morrison as the man. They still had Turiaf, and Derek Raivio had emerged into a star player as well. Unbeknownst to me, ESPN was in the building filming for the original series, The Season. The show seemed more focused around Morrison than the rest of the team, or at least in this episode. I’m sure it was the only one I ever watched. But in this particular episode, it was highlight after highlight of Morrison, and every highlight showed the same skinny guy in a green Keyshawn Johnson jersey standing courtside. Morrison went for 30+ that night, and every one of those shots was recorded on video with me in the background. I hated being associated with that. The closeup of me in the crowd on Wheel of Fortune? No complaints. But broadcasting Adam Morrison propaganda to the entire world with my face as an accessory? I don’t want that burden. (Editor’s Note: Naturally I was unable to find this video anywhere. If anyone knows how or where to find it, let me know.)

Picture was taken in 2014, during Morrison's first game back in Charlotte after being traded for Jerry Stackhouse and DJ Augustin's expiring contract.

So, now that the Adam Morrison show has long been removed from primetime and we all know what’s happened since, I hereby declare him the First Ever FUTURE RFP OF THE DAY. He

did me wrong on the first night we met, when he may or may not have hit a game winner to beat my school. He also dragged me along on his traveling soap opera when I was in the background of every highlight that ESPN may or may not aired. He deserves to be random and forgotten for that.  Fifteen years from now, some kid who’s in 2nd grade right now will blog something to the tune of, “Hey, remember Adam Morrison? He’s random and forgotten. Member his hair and mustache? Member when he was good? Blah blah blah.” Well this is the prelude to that post. This is my Nostradamus prediction (insert ‘of the week’ for recurring blog feature idea), that this man, here’s a man, who may end up being best known for crying at the end of a game, but here’s a man…. Well, he’s just the man for his place and time. The random, forgotten, mustache having, Head of the Class watching man.

Sorry, no recap or analysis – I missed the game. Since 75% of Doin Work is USF alumni, we had to honor the Dons huge upset of #13 Gonzaga last night in San Francisco. What’s funny is I didn’t even bother checking the score at any point last night. I’ll typically check scores for just about every other WCC opponent, but Gonzaga I usually don’t bother. I didn’t find out until this morning when I logged into Facebook and someone had posted a comment that said “Congrats on the win.” I got that immediate adrenaline rush like when you realize you’ve won the lottery. Actually, I don’t know what that feels like, but you know the “no way, that couldn’t have happened!” feeling. The loss was just the fourth for Gonzaga this season. The list reads like a who’s who of basketball powerhouse programs: Michigan State, Wake Forest, Duke, San Francisco. Okay, so maybe the fourth program doesn’t really belong anymore, but we’ll always have the mid-50s. We also still have more national championships than any school in California besides UCLA as well, but who’s counting. Senior forward Dior Lowhorn led the way for USF with 22 points and 9 rebounds. 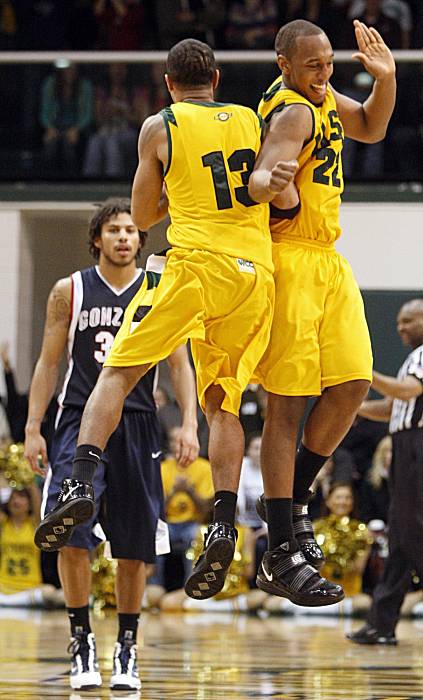