Warriors Are Still For Sale… 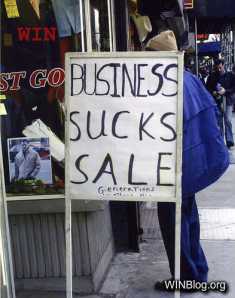 I’ve had numerous friends over the past month or so ask me about the Warriors sale, and what I thought their plans were going to be for the upcoming free agent bonanza that started today. The answer keeps being “not a whole lot” for both questions. I wanted to get up a post on something related to the sale for awhile now, and haven’t had anything really worthy of reporting to our awesome readers. Unfortunately, the sale process has been about as fast moving as the whole Cohan era, and nothing is going to happen sooner than expected. We originally thought there was a chance that we’d have a new owner in place by July, but now it sounds like we are going to have to wait at least until mid to late August to find out who will try to bring us out of our 15 year misery. As far as the free agency thing goes, we are pretty much going to avoid any possible moves that would make the team better in an effort to end the Cohan era in rightfully disappointing fashion.

I guess I didn’t really expect them to do much since most of their money is tied up, but they do have a nice bargaining chip in Monta Ellis to obtain a player that wants to play alongside Curry. I actually don’t care what they do until they have a new owner that WILL clean house. I prey that new owner doesn’t trade away my mancrush, Curry. My dream scenario that I doubt would ever happen, but may as well throw it out there is; Ellis, Biendris (throw in a first round pick) for Gasol and Gay (if Gay goes for the sign and trade since he’s a restricted free agent). This will never happen, and at this point the fans are the only true asset to this franchise, and if possible, Cohan would’ve traded us for cash to the Lakers long ago.

Now, to the sale of the team. From what I’ve read, the nonbinding bid round is over. I wasn’t a fan of this non-binding bid thing, I mean, if I wanted to write $400M on a piece of paper with my name on it, and had sent it to them, that would’ve counted as a bid, which is why I think they had twenty or so bids during that first round. Now that we’ve passed the opening stages, the Warriors have opened up their books for the top four potential owners to look at, and evaluate. I believe all the groups have actually visited Roaracle and taken a tour the facilities. Now that the bidders have seen the books and facilities, they are now submitting binding bids. If there are two close to eachother, I’m sure Cohan will allow those two to punch it out, so he can get his top $ for the team. Here are the top four bidders in the mix, and I have to say I’m heavily rooting for the first two over the last two. END_OF_DOCUMENT_TOKEN_TO_BE_REPLACED