Meyer In; Erickson, Neuheisel Out 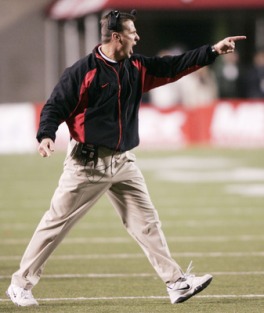 Urban Meyer Named Ohio State Head Coach – Shocker. Meyer’s “time off to spend with his family” was the coaching equivalent of Kim Kardashian’s marriage to Kris Humphries. None of us believed him, and what made it worse was, like Kim, he actually believed himself. And then, despite our low expectations, he comes back not even two full seasons from when he walked away. Let’s not forget to mention that Ohio State is even less removed from its relationship with Jim Tressell. What a dirty pair. These two parties deserve each other. Have we still not heard of any sanctions against the school from the NCAA? Is Meyer planning on coaching non-bowl eligible teams for the next few years? USC is still paying, so I expect Meyer to be severely handcuffed for the duration of his new contract.

Dennis Erickson Let Go By Arizona State – This one was a little tough for me to agree with. Erickson’s had an up and down tenure at ASU, but he had them off to a 6-2 start, with some decent credentials (wins over USC and Missouri, and respectable losses at Oregon and Illinois). But the Sun Devils ultimately lost their last four games and finished 6-6, which would mark the fourth consecutive year that Erickson failed to crack the .500 mark. I don’t know why all these Pac-12 ADs think their schools should recruit the same caliber players as USC and Oregon. Erickson played the hand he was dealt, and appeared to have some momentum going forward. He should have got one more shot at it. But, state rival Arizona made news last week when they hired Rich Rodriguez, so I guess ASU had to try and outdo them.

Rick Neuheisel Let Go By UCLA – The coach will not be returning next year, but he will be coaching in the Pac-12 Championship. I’ll never understand that one. How is he gonna care about that game? Sure he’ll want those kids to win under his watch, but I don’t think I’d be putting my best effort forth. It’ll be interesting to see how Neuheisel prepares the Bruins for a deathtrap this weekend. UCLA has to go into Oregon and play a 10-2 Ducks team that is probably looking ahead to the Rose Bowl. This is coming off a 50-0 loss at the hands of USC, which is probably what cost him his job.

Let's Go Oakland....clap, clap, clap clap clap END_OF_DOCUMENT_TOKEN_TO_BE_REPLACED
This entry was posted on Monday, November 28th, 2011 at 8:20 pm and tagged with arizona state football, college football, dennis erickson, ohio state football, rick neuheisel, ucla football, urban meyer and posted in Sports. You can follow any responses to this entry through the RSS 2.0 feed.
« Hoops are back on!
Orton’s Final Stand »

5 responses to “Meyer In; Erickson, Neuheisel Out”