A’s Get Robbed In Bugtown USA 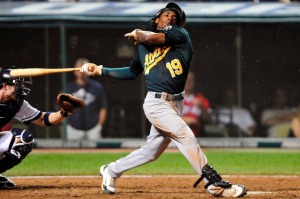 I guess it doesn’t really matter, so I shouldn’t be crying over spilled milk, but the A’s got robbed in Cleveland tonight. For a while I thought the bugs were going to dictate the outcome of the game, and we’d be able to blame it on the insects, like the Yankees did in the playoffs a few years back. Instead, we can blame it on BRUCE DRECKMAN.  YOU blew a call tonight Dreckman, all because you wanted to go home. The A’s and Indians were deadlocked in a 3-3 tie in the 16th inning. A run hadn’t been scored in 10 innings, but it was just passed midnight in Cleveland, and you wanted to hit the hay. Well I’m not gonna stand for this. This aggression will not stand, man. Kurt Suzuki clearly made the tag on the ass no less than 6 inches ahead of the plate. I know the bugs must be a pain in the ass, but let’s at least let the players on the field determine the outcome of the game. This was the biggest blown call since Jim Joyce ruined Armando Galarraga’s career. There was only one out, so it’s not like the Indians probably wouldn’t have scored. But to send a team home on that play, is no doubt a low point in the season. It may not seem like a big deal now, but for all you fans of playoff teams, just hope that you don’t get dealt Bruce Dreckman for one of your series. His blown call will sail under the radar, but it won’t go without notice on Doin Work. F*** YOU BRUCE DRECKMAN.

I know I’ve neglected the blog for the past couple weeks, and it’s mostly because summer seems to get in the way of everything. Let’s face it there’s so many more fun things to do than sit in front of your computer when it’s nice out. Anyways, this video is a little old, but if you haven’t seen this guy steal a police car and take you with him on his wild ride with the dash cam, you have to watch it once. I don’t play video games nearly as much as I used to, but this is truly a GTA move in real life. I’m sure grabbing the cop car instantly got him two stars. Not quite a three star robbery, because no helicopters entered the chase, but ballsy to say the least.