Slater Takes Down US Open

I’m not overly into surfing, and would never consider myself good at the sport. I am much more of the skateboarder/snowboarder type, but do pay a little attention to surfing since I live in Huntington Beach, and worked for Quiksilver for about five years. I think the main reason I never got entirely into the sport, is because it’s a lot of work for what feels like little reward. Yes, when you catch a wave it’s a great feeling, but spending most my time in the water paddling around and not catching waves never really appealed to me as much as the skate and snow sports did. Anyways, this weekend I watched the final two days of the US Open for Surfing which they hold in Huntington Beach every year, and these guys don’t get nearly enough credit for how good they are. 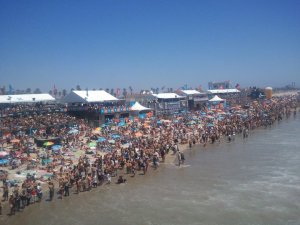 This year was a little different than years past. Usually we only get micro swells (aka crappy waves, aka ankle biters), but this year because of a hurricane/tsunami the waves were actually good during the last few days of the two week competition. The increased swell made me want to see some of the pros, and I was glad I did manage to fight the crowds finding a spot to watch. In the semi final heat Slater pulled out this huge 360,which helped him have the highest score of the day and propelled him into the finals. What was more amazing about the whole contest was that some friends and I were talking about Slater before the weekend, and we all agreed that he was starting to fall off a bit. Boom,  four days later he wins the US Open and takes over first in the ASP world rankings. The ageless wonder that is Kelly Slater has 10 ASP titles (most valuable surfer award each year) and looks like he’s about to win his 11th this year if everything holds form. I’m not sure why, but I feel like his career is already better than guys like Tony Hawk, Matt Hoffman, and Shaun White. It seems like we are often asked what sport we’d want to play if we could be a pro at one of them. My first choice would be golf then surfing simply based on where you get to go travel while on the “job”. Plus, with those two sports you can make millions, and still be relatively unknown to most of the public secret millionaire style.

I'm a dude that just hit 30 years old. Pretty much like everything that is funny, insightful, and has to do with the Warriors, A's, and Raiders. END_OF_DOCUMENT_TOKEN_TO_BE_REPLACED
This entry was posted on Tuesday, August 9th, 2011 at 3:11 pm and tagged with ASP, Huntington Beach, Kelly Slater, US Open and posted in Sports. You can follow any responses to this entry through the RSS 2.0 feed.
« Golf Cart Crashes
Wanamaker Yours? »

7 responses to “Slater Takes Down US Open”