Excitement in Oakland, and His Name is Jemile Weeks 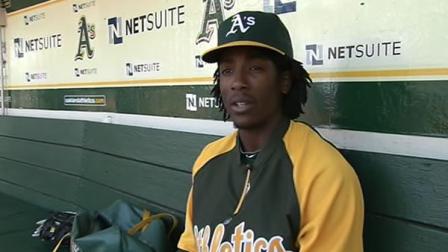 It’s been a little over two weeks since the A’s called up the 2008 #1 pick, Jemile Weeks. MCeezy already declared him his favorite current A’s player on facebook the other day, and I have to say I’d agree with that sentiment. Hopefully writing about him doesn’t jinx him like I did writing about Matt Joyce’s great year, but sometimes you have to risk it when you’re excited. It’s been awhile since one of our position player prospects caused this much stir on Athletics Nation (the best A’s blog). Yeah, there was excitement when Chris Carter was called up last year, but ultimately he didn’t do anything. Weeks on the other hand, has been tearing the cover off the ball. He hit three triples in his first week in the big leagues. He has been playing so well he has earned his spot as our leadoff man the past few games. He’s also seems to have taken our longest tenured A’s player’s spot, 2B Mark Ellis (11 years with Oakland), in those two short weeks. If we still had Geren as our manager, I bet Weeks would go back to the bench when Ellis comes off the DL today, but now that we have a competent manager, I don’t see Melvin taking the hot bat out of the lineup. He’s already given Matsui some confidence, and has shown that he will play the best players every night. How has Weeks earned that leadoff spot? By taking professional atbats and swinging at a very low rate of balls out of the strike zone. Translation; he doesn’t swing at bad pitches, and when he does swing he connects on 80% of pitches. So far the switch hitter is batting .362 with an OBP% of .400, .572 SLG%., and 4 steals to boot. To say he’s been our table setter over this current six game winning streak would be the understatement of the day. He’s had a couple of blemishes in the field, but that can be overlooked when he’s making more great plays than bad ones. Weeks has great range because of his speed, and even with this very short sample size, I feel he could win a gold glove one day if he continues to work on his fielding. 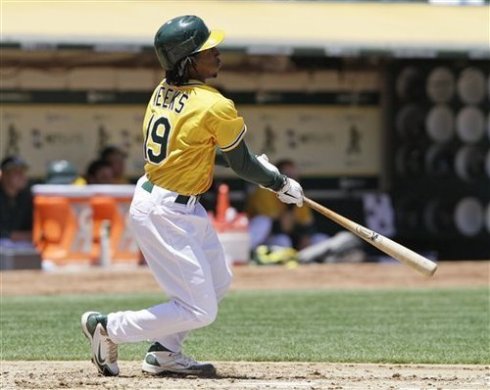 Maybe A’s fans are getting a little ahead of themselves with Weeks already saying that he is the next Reyes. I saw a comment yesterday that Weeks even hit a triple off Chuck Norris! All kidding aside, even though his small sample size has been great, it’s tough to see him being able to keep it going as well as he has. I’m sure he’s bound to hit a rookie wall at some point. Even if he does, I can’t think of a prospect that we’ve called up in the last four years that wasn’t a pitcher that I was this excited about! Maybe Kurt Suzuki, but it looks like we finally found a solid offensive piece, after numerous underwhelming prospects (Barton, Pennington, Carson, Watson, Crosby, Buck, Keilty, and many more). The only thing I’m cautioning myself for is that he has been hurt a lot over the three years in our farm system. It’s probably because he plays with reckless abandon, which usually results in an injury or two, but there’s noway you’d want to change that since that’s what makes him successful. Maybe he needs to learn something from Reyes as he said this year that he needed to learn when to go 110% and when to go 80% which is why he’s been a lot healthier this season. As of the moment, I’ve developed a Curry-like mancrush on Jemile, and he’s already paying dividends if you picked him up for your fantasy team!