Who Thinks the Rangers Can Win? THIS GUY! 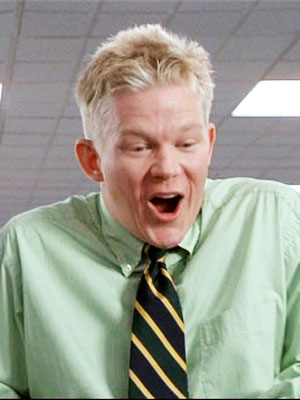 Even though I had my doubts when the Rangers drew the Rays in the first round, they still came through. For some reason I like the Rangers chances even more against the all mighty Yankees than I did against the Rays. Back in September when the Rangers swept the Yankees, I started to believe in them, and wrote a little about why. In that series they were without Josh Hamilton, and the Yankees were without A-Rod, so I figure those two injuries evened each other out lineup wise. What they got from that series more than anything was some extra confidence that they belong with the best. The Rangers have a swagger to them, there’s no way around it, and they’ve been that way all year. I know I brought this up in an older post, but I remember one game back in June when Ian Kinsler was yelling at the Angels players after the game in Arlington to get off their field. I thought it was kind of stupid since they played each other the next day, but it speaks volumes about this team’s mentality, and how together they are. I mean, how many teams would do a separate ginger ale celebration because one of their players is an addict? How many teams survive a manager’s dirty drug test? How many teams would have survived a bankruptcy during a season seeing guys that played in Texas eight years ago, still not being paid what was owed to them? Not many can go through that much turmoil in the workplace, but I think all those outside distractions just made them closer. They don’t roll over like the Twins did when things went wrong, they just move on to the next pitch.

What confidence could they have gotten from sweeping the Yankees in early September? Aside from the knowledge that you could beat the Yankees, it was more how they won those games. I actually watched most of this series because it was on MLBTV, and it was a great series so I hope the ALCS is just as good. One of the games, Nelson Cruz hit a homer to tie the game in the 8th and hit another one in the 13th to give them the victory, chalk that win up to power. The next night they scored two runs off Mr. Automatic, Mariano Rivera, to win the game, chalk that win up to small ball. You can’t underestimate how much it means mentally to know that you’ve come back and beat the best closer of all-time. The last night of that sweep, Cliff Lee did his usually 8 innings of work and got them another victory, chalk that one up to pitching. 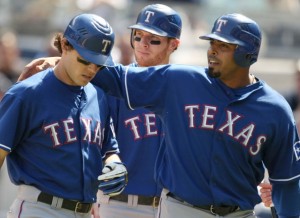 Basically they showed that they can win in every way possible, and needed all three types of games to pull off the sweep. It might be a little different feel in the October pennant chase, but knowing that they’ve done it before will only help their mojo.

Another reason I’m picking the Rangers to win the ALCS series is that they remind me a lot of that Gayngels team that won the World Series in 2002. When the Angels played the Yankees back then, they made them look old. I think this Rangers team can do the same thing. They have a lot of guys that can steal bases on Posada’s super soaker arm (is that the opposite of a cannon arm? I don’t know). I think they might even give Bengie Molina the green light on the base paths with Posada behind the plate. Putting pressure on pitchers with speedy runners on base is underrated, and if they think they can slow them down when the AJ Burnett and Posada are out there, you must not have seen the last series with Shoppach behind the plate. Anyways, back to my comparison. The 2002 Angels had Salmon, Vlad, Glaus, and Anderson to go with speedy guys like Figgins and Eckstein. They played small ball, they played long ball, and they played catch up with that lame ass rally monkey. This Rangers team has that same type of build, where they can play any style. This Rangers team has more speed than that Angels team in 2002 did, and also imho has more power with even the non-conventional power guys in the lineup like Michael Young and Ian Kinsler. To say the Yankees lineup is far and away the better lineup is short sighted. Sure maybe if you look at career numbers it would certainly lead you that way, but the Rangers were ranked 4th in the AL in offense, so they can put runs up with the best of them. Reason number 294, why I’m picking the Rangers is Ron Washington (possibly coach of the year?), he was a great leader in the A’s clubhouse, and is doing the same in Texas. He’s loose, but pays attention to details just ask Eric Chavez and his many gold gloves. If it comes down to some late inning decisions, I would trust my life with Ron Washington, and think I’d trust Girardi as much as a Tim Donaghy refereed game. Would he leave A-Rod on the bench like he did in the All-Star game? I hope so, that would be some entertainment in itself!

Rangers in 7, just because I want to see Cliff Lee dominate the Yankees in a game 7. I know for a fact the Rangers won’t get swept, because AJ Burnett takes the hill in game 4. If the Yankees don’t win it by game 5 or 6 when CC and Hughes are on the mound, let’s just call this series over!

If you wanted something on the NLCS, I’m not going to write about it, but our buddy Bryan made some predictions for it.

I'm a dude that just hit 30 years old. Pretty much like everything that is funny, insightful, and has to do with the Warriors, A's, and Raiders. END_OF_DOCUMENT_TOKEN_TO_BE_REPLACED
This entry was posted on Thursday, October 14th, 2010 at 6:27 pm and tagged with A-Rod, ALCS, Baseball, beat, Cliff Lee, hitting, josh hamilton, MLB, New York Yankees, pitching, Playoffs, Prediction, preview, Ron Washington, Texas Rangers, winning and posted in Sports. You can follow any responses to this entry through the RSS 2.0 feed.
« Team China Representing
Doin Lines Week 6 »

11 responses to “Who Thinks the Rangers Can Win? THIS GUY!”