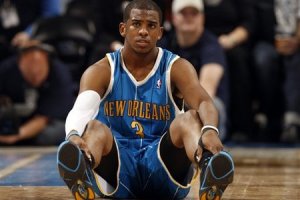 But, my one “Told you so” prediction for the 2010-2011 NBA season is essentially a guarantee.  Chris Paul was the guest on The NBA on TNT pre-game and halftime show during Game 2 of the Cleveland/Boston series tonight.  Charles Barkley went on to tell Chris Paul to his face, that he no longer considers him the best point guard in the NBA, and that he is now second to Deron Williams of Utah.  Now you can argue back and forth about the two, and which one is better, honestly, having the choice of either is a win-win situation, that’s not the point … but – CP3 has a fierce competitive edge to him.  So when Barkley was telling him this, he was simply smiling, pretending to not be affected by his comments, but … as I was listening to, and watching this interaction between the two, I couldn’t help but focus on Chris Paul’s facial expressions, and sure enough, there was a bit of a scowl being held back.

So what I can guarantee you is this, Chris Paul is going to be an absolute beast next season.  Watch.  I can even guarantee this, he will finish second in MVP voting behind one LeBron James.  Yes, three-peat is in the works for LBJ, and when this all unfolds, we here at Doin-Work will be the first to remind you … TOLD YOU SO.

This entry was posted on Monday, May 3rd, 2010 at 7:01 pm and tagged with basketball, best point guard, chris paul, CP3, deron williams, NBA, new orleans hornets, top player and posted in Sports. You can follow any responses to this entry through the RSS 2.0 feed.
« Washed Up or Blackballed?
J-Ridiculous! »