Air Jordan’s Enshrinement Caps Off a lot of Memories

His Airness will be enshrined into the Hall of Fame on September 11 in Springfield Mass, and he is undoubtedly the head of this class. He’s probably the greatest competitor and basketball player we’ll see in our lifetime. I don’t think I fully appreciated until I was about 12 years old around the time of his first retirement. Growing up a Warriors fan, I probably didn’t even realize the importance of the playoffs. I honestly couldn’t stand Jordan in my youthful days. I did like his shoes, commercials (Jordan and Bird playing H-O-R-S-E was my favorite), and of course Gatorade. I just despised him because he always won. Maybe that’s why I’ve never really been a Tiger fan, but I would and do watch whenever a great player is displaying their talents. I can’t even fathom how hard they work to be that good.

By the time he was on his way to his second three-peat I started to become a fan, and realized that this was a type of player that we’d never see again.

He was such a competitor that he didn’t let business and pleasure ever come together. He never really befriended his teammates calling them “co-workers”. He decided against playing in a second Olympics, for what many felt were selfish reasons. Jordan showed Barkley in the 92 Olympics how a player works so hard on a daily basis to be at the level he was. Jordan let out some of his secrets that showed other guys in the league what made him great. He payed for it, as Barkley had his best year following those Olympic games. MJ showed Chuck too much of what he did to prepare himself, and Barkley must’ve taken notes winning the MVP over Jordan in that 92-93 season. Never again would Jordan play in the Olympic games. You have to admire a man who goes out of his way to not get to close to teammates or play for a gold medal to avoid showing them what makes him tick.

I looked through his stats awhile back when comparing him to Kobe through the first part of his career, so if you double those that’s about what he ended with. Here’s a few random ones that you don’t always see 30.1 PPG (highest average of all time), 32,292 points (Kareem and Malone had more), 2,514 steals (2nd to Stockton), and the best shoes in the game. We all know about his MVP’s and Championships as well, that dubbed him the greatest of all time. There’s still youtube clips of him tearing it up. It almost looks like he could still play in the NBA. Good thing they don’t count your post career to get into the Hall of Fame, because he is not a good GM or Owner. I guess it would be hard when you expect your players to be as good as you or possibly just doesn’t care.

Also joining him in the very good class of 2009 is John Stockton, David Robinson, and Jerry Sloan. Once again Stockton will be in the shadows of Jordan even being enshrined into basketball immortality. Tough break for short shorts. 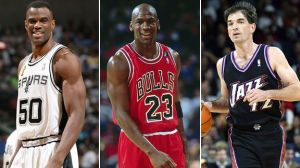 The Admiral won a couple championships and gold medals. Stockton won gold medals, but unfortunately he played his prime in the Jordan era. Jerry Sloan is being inducted, but is still coaching. I never understood this, why induct a coach for coaching if they are still roaming the sidelines?!? I think they should have to wait until 3 or so years pass after they coached their last game to be eligible. It makes so much more sense!

I'm a dude that just hit 30 years old. Pretty much like everything that is funny, insightful, and has to do with the Warriors, A's, and Raiders. END_OF_DOCUMENT_TOKEN_TO_BE_REPLACED
This entry was posted on Wednesday, September 2nd, 2009 at 10:28 pm and tagged with basketball, Chicago Bulls, David Robinson, Enshrined, Hall of fame, Jerry Sloan, John Stocton, Michael Jordan, NBA, September 11 and posted in Sports. You can follow any responses to this entry through the RSS 2.0 feed.
« College Football Kickoff – Oregon @ Boise State, Thu SEP 3
Is the Kid Going to Ride Off into the Sunset? »