On Second Thought, The Jazz Got The Better Of The Deron Williams Trade 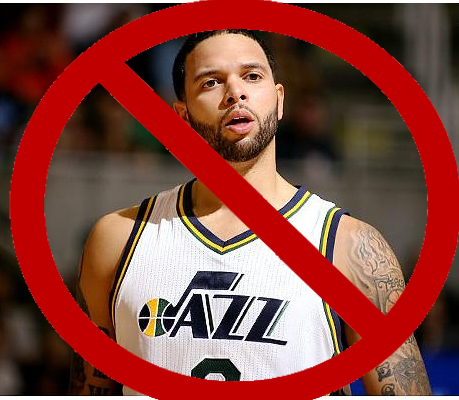 When I first saw the news, I said “wow, the Jazz just did the unthinkable and traded their star-player without getting a new star player in return.” It doesn’t always work out for the team who acquires the star, but it never works out for the team who gives him up. Unfortunately, due to the increasingly complex financial aspect of the league, it’s becoming more and more common. Gone are the days of good player for good player trades. Now it’s just an unhappy superstar with a bruised ego for an expiring contract, a failed young project worth giving a fresh start, and a draft pick. The Jazz and Nets stuck pretty close to the script in their deal centered around Deron Williams. I still think this was essentially Utah needing to get rid of a cancerous superstar, but they managed to come away with a pretty impressive haul.

What makes it appear underwhelming is that the primary component is Devin Harris, which doesn’t exactly jump out at anybody. But this is a guy who was an all-star just two years ago with the Nets when he put up 21 pts and 7 ast for the season. Injuries have been a problem, limiting Harris to under 70 games in each of the last four seasons. I’d be willing to bet, though, that he’ll find a way to stay healthy for a while now that he gets to run the point with Paul Millsap and Al Jefferson flashing in and out of the lane. It could go either way, but the upside of Devin Harris on this Jazz team is pretty amazing.

Add to that they’ve added Derrick Favors, who hasn’t exactly been getting a lot of rookie of the year hype, averaging 6 pts and 5 reb in 20 minutes a night. But honestly, when was the last time a 3rd overall pick was traded halfway into his rookie season? He’s not exactly the “failed young project” I mentioned earlier. Favors is a kid who played one year of college ball and was drafted purely on physical potential. I don’t think he was really supposed to be NBA ready. There’s still no question that he’ll be a solid player in the league – it’s just not going to happen right away. The opportunity is there for him in Utah though. Fans in Salt Lake are growing bored of Andrei Kirilenko and are quietly rooting for him to get replaced. With Millsap and Jefferson looking poised to anchor the frontcourt for years to come, Favors could be just what coach Tyrone Corbin needs to round out a giant front line. And if Corbin was able to average double figures in his first season with the Jazz back in 92-93, surely he can get Favors to.

BUT WAIT, THERE’S MORE….. the Jazz ALSO get a first round pick this year AND a first round pick year. This year’s draft class isn’t exactly the greatest – the Clippers hate it, in fact. But Utah will likely be looking at a top ten pick this year. Then in 2012 they’ll get the Warriors’ first round pick, and I still have no idea why. It’s somewhat protected, but since the W’s are rarely in the top six, I’m sure the Jazz will get it. That’s two more chances in the next two years that they’ll have to draft their next Deron Williams, minus the driving out your legendary longest-tenured coach in all of professional sports. Just getting rid of that is a win for Utah.

Quickest NBA Mock Draft Up on the Web 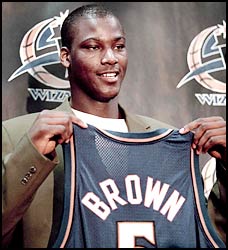 Well, another rigged NBA Lottery is in the books. To no one’s surprise, two East Coast franchises leapfrogged the likes of Minnesota, Sacramento, and Golden State. Fans across those three cities are moaning and groaning while Wizards and Sixers fans are wondering how they got such good luck. Fortunately, the two best rookies from last year’s draft ended up in Northern California despite David Stern’s best (or worst, depending on how you look at) efforts. No need to worry Kings and Warriors fans. The two best players came at picks number 4 and 7…. No reason to think they can’t come at the 5th and 6th position.  Let’s break down how this year’s draft is going to pan out….

1. Washington Wizards – John Wall – Part of me thinks that the late Abe Pollin made this happen from up above. The other part of me thinks Stern did this from down below. At any rate, the Wizards will win the John Wall sweepstakes, but it’s not going to change their fortunes. This franchise has found a way to lose under any circumstance. They had a solid core with Gilbert Arenas, Antawn Jamison, and Caron Butler and still managed to be a lottery team. This year, they’ll try to ease Wall along, if only to keep Arenas happy. John Wall will go on to have an Antonio Daniels like career and the Wizards will be back in Secaucus next year….and the year after that….and the year after that.

2. Philadelphia Sixers – Evan Turner – Evan Turner is the consensus #2 pick, but his game is strikingly similar to Andre Iguodala. He’ll also fight for playing time on the wing with Thaddeus Young. In the end, the Sixers will keep Turner on the court to try and prove that they drafted better than last year with Jrue Holiday, and they’ll miss the playoffs once again. I’m setting the over/under on Evan Turner’s rookie season right at, let’s say, Corey Brewer.

3. New Jersey Nets – Derrick Favors – The Nets have a solid 1-2 in Devin Harris and Brook Lopez. Therefore, they look to the wing and select Derrick Favors. Problem is, no one’s really sure that Favors really likes playing basketball. Prediction: Favors and Terrence Williams still make little to no impact on the Nets in 2010-11.