Marshawn Charged for Grand Theft of $20 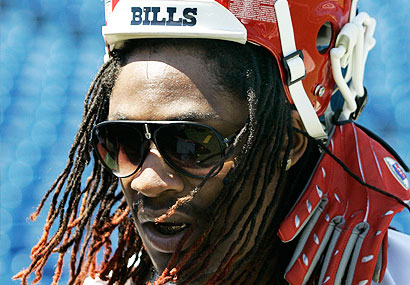 BUFFALO, N.Y.— Buffalo Bills running back Marshawn Lynch has been accused of stealing $20 from a police officer’s wife.

Buffalo Police Sgt. William Crawford, filed a complaint with Hamburg Police saying the football player took $20 from his wife last month while at a T.G.I. Friday’s restaurant at the McKinley Mall.

Hamburg Police are not commenting on the issue because the woman who alleges Lynch stole money from her has not filed a complaint yet.

The Department did release a statement on Sunday:

“The facts reported in the January 9th edition of the Buffalo News regarding an incident between Marshawn Lynch and Mrs. Crawford are not consistent with those conveyed to our department by Mrs. Crawford. The Town of Hamburg Police has received no complaint from anyone directly involved.

ProFootballTalk.com reported Lynch’s agent is speaking out about the incident. Doug Hendrickson is calling the allegations “false and entirely malicious” and “slanderous.”

Hendrickson goes on to tell ProFootballTalk that he is a “racist rogue cop” and that the cop is “very dangerous and citizens of Buffalo should be scared that this guy is on the force.”

Okay, so maybe I lied about the grand theft part, but he is accused of taking a Andrew Jackson out of someone’s hand. It’s always fun to watch the player’s that comes out of Cal in the NFL, and Marshawn has been no exception to the rule. They are just cocky and fun to follow for good or bad. When I read this story, I could help but laugh. I honestly don’t even need to know the rest of the details to think this is one of the worst charges I’ve ever seen. The trashy lowlifes that go on the peoples court shows don’t even care about $20, so why is this lady? Maybe it’s Marshawn’s gold teeth or his flowing dreadlocks that make him kind of scary, but I don’t see the reasoning behind this claim. I think the “rogue racist cop” has a racist wife as well. Apparently, when the wife of the officer was going to pay for the bill she pulled out a $20 bill and Lynch snagged it from her hand as he and teammates were talking to the ladies at the table. Not sure why she didn’t say anything to anyone at the time, after all it was TGI Fridays NOT some club or any kind dangerous place to say something. Even if she was scared of him from those rape charges he had awhile back, that should just give her one more of a reason to report it right away. I can almost guarantee management at the restaurant could have done something to settle the situation if she had told them. Scared of the guy or not, as a police officers wife you should know your rights, and be aware of your surroundings. What makes this story even less believable in my mind, is that the filing of these charges weren’t until now, and the incident happened way back on December 7th! WTF lady!?! I guess this is just one more sign that Marshawn needs to get out of Buffalo. Maybe he’ll make a comeback in a new uniform like Cedric Benson did with Cincy this year…