Do NBA Draft “Projects” Ever Work Out? 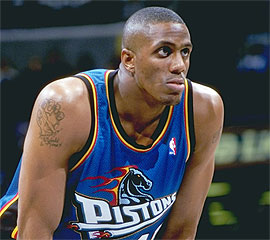 It was probably all the European players selected in the NBA Draft, but one phrase I heard a lot was, “won’t be able to help right away.” This is a relatively new phenomenon for professional basketball, since it used to be the one leage where your draft picks were expected to make a sudden impact. Not so much anymore. When I do a quick recap of players in the past that weren’t expected to contribute right away but had successful careers, I immediately think of Kobe Bryant and Kevin Garnett. But they both became legit players in just their second year. Since then, I’m left coming up with names like Korleone Young and Hasheem Thabeet. Was Thabeet even supposed to be a project in the first place? I thought he was supposed to be able to contribute right away. Instead, he spent the majority of the season in the D-League, before being traded with a future first round pick for Shane Battier. Obviously the move seemed to pay off for Memphis, but what a quick decline that was for Thabeet! Let’s take a look back over the last 10 years or so at

guys who were drafted with the hopes of them contributing for their team a few years down the road. I’ll leave out Hassan Whiteside, who just over a year ago was projected as a lottery pick. When he slipped to number 33, he was considered to be a steal. In his rookie season, he only saw two minutes of action, and his only statistical contribution was a pair of fouls. Here are some guys who had a bigger pair of shoes to fill….

Michael Olowokandi, 1998 – I think the Kandi Man was supposed to make an impact right away, but the Clippers still drafted him on potential. He put up decent numbers in five seasons in LA, but the team gave up on him after 5 years. His career began its rapid decline as soon as his stint with the Timberwolves began. Clipper fans will always wonder what if they had selected Paul Pierce or Dirk Nowitzki, and would happily settle for Vince Carter, Antawn Jamison, or Mike Bibby.

Al Harrington, 1998 – Harrington may be one of the few exceptions. Drafted out of high school, it took him about four and a half years to hit his stride, but he’s carved out a pretty decent NBA career.

Rashard Lewis, 1998 – Up until a few years ago, Lewis was the perfect success story for draft projects. It took two years of work, but he blossomed into an all-star for Seattle.

Jonathan Bender, 1999 – It’s been said that injuries kept Bender from becoming a great NBA player, but in seven seasons, he never really got over the hump. At least the team that drafted him, Toronto, quickly flipped him to Indiana for Antoni Davis. At least that selection didn’t haunt them, like if they had taken Trajan Langdon or William Avery.

Darius Miles, 2000 – Another blown pick by the Clippers. He seemed to finally come into his own five or six years in, but then injuries derailed his career. Instead, his best performances will be forever be remembered as his roles in Van Wilder and The Perfect Score.

DeSagana Diop, 2001 – I don’t remember what exactly was expected of Diop at the time, but with the number 8 pick, you probably expect more than a career 2 pt, 2 reb player.

Nikoloz Tskitishvili, 2002 – I probably don’t even have to explain how this one went.

Amare Stoudemire, 2002 – Stoudemire went four slots later and was a 20 pt scorer in his second season. Obviously this was a pick that paid off. Cleveland and the Cippers also passed on Amare, for the likes of Dajuan Wagner and Chris Wilcox.

Darko Milicic, 2003 – Not needing help right away, the Pistons swung for the fences with Darko and whiffed badly. Even though they were already a contender, they would have been better off trading the pick, or as big of a problem as it would have been, drafted Carmelo Anthony or Chris Bosh… or Dwyane Wade or Chris Kaman.

Ndudi Ebi, 2003 – Who actually remembers this guy? I remember reading about him in SLAM magazine when he was probably like five years old. He may have been a little older, but he was supposed to be a future star. Looks like he’s found a gig in Europe these days.

Shaun Livingston, 2004 – I don’t even know why the Clippers try. I mean, I guess it could have been worse. They could have gone for Robert Swift instead.

Let's Go Oakland....clap, clap, clap clap clap END_OF_DOCUMENT_TOKEN_TO_BE_REPLACED
This entry was posted on Monday, June 27th, 2011 at 6:51 pm and tagged with NBA draft, nba draft busts and posted in Sports. You can follow any responses to this entry through the RSS 2.0 feed.
« Lebron Loses WWF Mashup
A Spending Spree, Starring the Warriors?!? »

9 responses to “Do NBA Draft “Projects” Ever Work Out?”